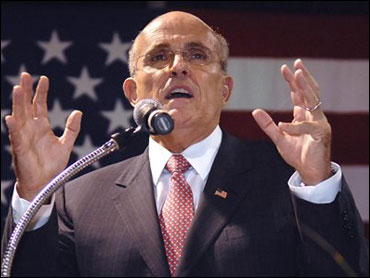 A top donor to presidential candidate Rudy Giuliani was the source of the one - and only - contribution to a proposed California ballot measure that would have made it much harder for Democrats to win the White House, according to a published report.

The campaign to qualify the measure for next year's ballot collapsed Thursday when two of its top consultants quit, complaining they had not been told who gave the money.

The donor, hedge fund giant Paul Singer, came out of the shadows Friday in a statement to the New York Daily News. Singer, a founding partner of the hedge fund Elliot Associates, said he gave $175,000 to a mystery-shrouded Missouri-based corporation called Take Initiative America.

The money was given to a California group so it could gather signatures to qualify the measure for next year's June primary and alter the rules before the November vote.

The measure would have changed California's winner-take-all system to one in which all but two of the state's electoral votes would be awarded to the top vote-getter in each Congressional district.

Since about 22 of California's districts are heavily Republican, the Republican nominee would almost certainly win them, gaining nearly half California's 55 electoral votes - about the equivalent of winning Ohio. That would make it almost impossible for a Democrat to win the national contest.

Singer told the Daily News that he made the contribution "without any restrictions, including whether or how it would need to be disclosed. I left disclosure completely up to TIA."

The Giuliani campaign denied any prior knowledge of the contribution, although Singer is a member of the campaign's national finance committee.

"This is completely independent from our campaign," said Jarrod Agen, a spokesman for Giuliani's campaign in California.

Giuliani has denied any involvement in the Missouri corporation's donation. At a campaign stop in Northern California wine country, he said he believed he could win the state outright.

"If anything it's probably something that I would have opposed," Guiliani said of the scuttled ballot measure. "It doesn't make sense to try to change the rules in midstream like this."