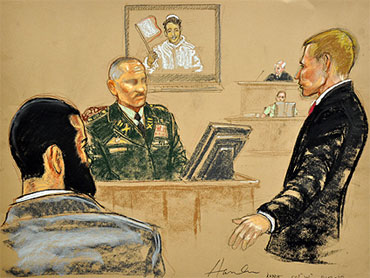 The war-crimes trial of a young Canadian detainee will be put on hold for at least 30 days due to the illness of his Pentagon-appointed attorney, a defense official said Friday.

Army Lt. Col. Jon Jackson, who collapsed in the courtroom Thursday, is to be airlifted to the United States for treatment of complications from recent gall bladder surgery, said Bryan Broyles, the deputy chief defense counsel for the military trials at Guantanamo Bay.

Broyles said he expects the same jury will later pick up the case and Jackson will stay on as Omar Khadr's attorney.

"For Lt. Col. Jackson, that is his only concern right now, probably to the detriment of his health," Broyles told reporters at a news conference inside a hangar at this U.S. Navy base in Cuba.

Opening arguments were presented earlier Thursday in the Khadr trial after more than four years of delays due to legal challenges and changes in the offshore system for prosecuting terrorists. The trial, which was expected to take about a month, is the first at Guantanamo under President Barack Obama.

Khadr is only the third detainee to go on trial at the prison that opened in 2002 and has held nearly 800 detainees, mostly suspected militants captured in and around Afghanistan. Obama has struggled to fulfill a pledge to close the prison and is considering dozens of detainees for prosecution by the Guantanamo tribunals.

Jackson is the only attorney authorized to speak for Khadr, who fired two civilian American attorneys during pretrial hearings. Jackson joked earlier this week during jury selection that he is an "army of one."

He fainted Thursday while questioning a retired Special Forces soldier who testified that he shot Khadr twice in the back during a firefight at an al Qaeda compound in Afghanistan.

Khadr, who was 15 when he was captured in 2002, is accused of killing a U.S. soldier with a grenade during the battle. He has pleaded not guilty to five charges including murder, conspiracy and spying. He faces a maximum life sentence if convicted.

Khadr, now 23, is the youngest of the 176 detainees at Guantanamo and the only remaining Westerner.

Defense attorneys say the Toronto-born detainee was pushed into war by his father, Ahmed Said Khadr, an alleged al Qaeda financier whose family stayed with Osama bin Laden briefly when Omar Khadr was a boy.

The Egyptian-born father was killed in 2003 when a Pakistani military helicopter shelled the house where he was staying with senior al Qaeda operatives.

Khadr's jury is made up of seven U.S. military officers who were flown to Guantanamo from bases around the world. Court has not been in session since Jackson collapsed and military prosecutors have not commented on the effect that Jackson's illness will have on the trial.