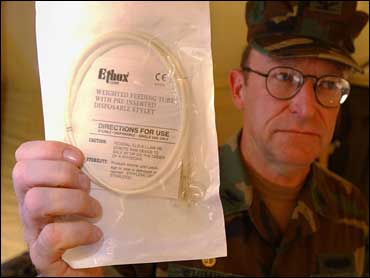 A prisoner at Guantanamo Bay said the U.S. military has taken aggressive new steps to end a hunger strike, from force-feeding detainees in a restraining chair to confiscating their blankets, according to notes released by his lawyer Thursday.

Fawzi al-Odah, a Kuwaiti who was interviewed by his attorney last week, said the military announced the harsher measures in late December to pressure detainees to halt the protest at the detention center on a U.S. base in eastern Cuba, the notes said.

The notes, which were declassified late Wednesday after a review by the U.S. Department of Defense, quote al-Odah as saying that officials warned detainees on Jan. 9 that hunger strikers would be strapped tightly to a restraint chair and force-fed with a thicker tube than had been used earlier.

He also said that detainees would no longer receive throat lozenges to ease the pain of the feeding tubes and that they would have their shoes, blankets and towels taken from them and confined to a room that was deliberately kept colder than normal if they refused food.

"I'm brave, but I'm not stupid," al-Odah is quoted as saying to explain his decision to quit the hunger strike. "On the chair, I'll be restrained and unable to resist. They are determined to torture me."

His lawyer, Tom Wilner, said he believes the methods are the reason the number of strikers has dropped to four from several dozen at the end of 2005.

"That's what stopped the hunger strike," said Wilner, who represents six prisoners from Kuwait. "They purposely force-fed these people to end the strike."

A spokesman for the detention center did not respond to messages seeking comment on the alleged use of the chair and harsher methods to end the strike.

U.S. Department of Defense spokesman Bryan Whitman said the feeding is administered by medical professionals in "a humane and compassionate manner" and only when necessary. He said the process is the same used in civilian U.S. prisons.

"It is the policy of the department to preserve life through lawful, clinical means," Whitman said.

The four who are still on strike, including three being force fed, are treated humanely and are in stable condition, said detention center spokesman Lt. Col. Jeremy Martin.

"We haven't changed anything. Our processes and procedures are the same," he said. "But the numbers have fluctuated."

Rick Murphy, a lawyer for another detainee, however, said medical records released by the Department of Defense under a court order show that one of his clients began to be "chair fed" on Jan. 11 shortly before he too decided to quit the strike.

"After 12 days of this treatment, he gave it up after he had been on the strike for over 140 days," Murphy said. "You can draw some conclusions from that."

The lawyer, whose firm represents five men from Yemen, said he could not discuss specifics of his recent meeting with the former hunger striker because the United States has not finished its review of his notes.

The military said the strike began with 76 detainees protesting their confinement at the remote, high-security prison in Cuba and the number reached 131 in mid-September. Defense lawyers say the figures have been higher.

The United States holds about 490 people on suspicion of links to al Qaeda or Afghanistan's ousted Taliban government at the base in Guantanamo. It has filed charges against 10 of the detainees.

Stephen Oleskey, a defense attorney who visited the base last month, said some of his clients, Algerians who were arrested in Bosnia, told him they had seen hunger strikers who were "emaciated" and needed help to walk.

Murphy said the medical records of his client, Muhammed Bawazir, show that on Jan. 10 he weighed 97.5 pounds, which military medical personnel said was 62 percent of his ideal body weight. His lawyers estimate he weighed about 135 pounds in July.

The medical records also show that Bawazir was restrained in the chair on Jan. 11 for 2 ½ hours, which is 30 minutes longer than the maximum recommended by the manufacturer, Murphy said. Martin said that it takes 90 minutes to feed detainees.

Martin, who called the protest an "al Qaeda tactic" to elicit media attention and to pressure the U.S. government, said the strikers have access to the International Committee of the Red Cross and are permitted to send and receive mail. The allegations of mistreatment, he said, are "absolutely false."

Separately, the U.S. military said it released 11 Guantanamo detainees; three to Morocco, one to Uganda and seven to Afghanistan. Moroccan officials said the prisoners who arrived there were under investigation by prosecutors in Casablanca, but they didn't elaborate.