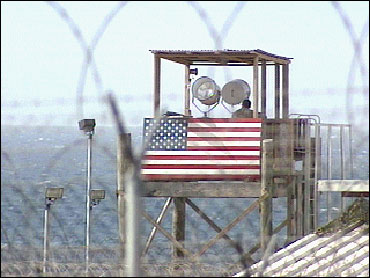 All 594 terrorist suspects held at the U.S. prison at Guantanamo Bay, Cuba, will be notified next week of their right to contest their detention in U.S. federal court and of their option to appear before a military panel to challenge their status as "enemy combatants."

But the Los Angeles Times reports that even as the Pentagon earlier this year announced plans to hold annual hearings for the Guantanamo detainees, top officials decided tentatively to hide some detainees from the process. Those detainees would be set aside because of their perceived intelligence value.

Now, the military is also planning to hold separate military panels to determine whether detainees belong at Guantanamo. That follows a Supreme Court ruling that Guantanamo detainees must receive due process.

Gordon England, the Navy secretary who is overseeing the process at Guantanamo Bay, told a Pentagon news conference Friday that he chose James McGarrah, a rear admiral in the Navy Reserve, to be the "convening authority" who will select the panel members, whom he called a "neutral party."

The Pentagon had announced Wednesday that Deputy Secretary of Defense Paul Wolfowitz had ordered that all Guantanamo Bay detainees be notified within 10 days of their opportunity to appear before the panels.

The purpose of the panels is limited to determining whether a detainee is properly classified as an "enemy combatant." If not, then the detainee would be released to his home country, England said.

The Pentagon has held most of the detainees at Guantanamo Bay without charges for more than two years on grounds that they are "enemy combatants" with no right to contest their detention in U.S. courts.

The Pentagon defines an "enemy combatant" as "an individual who was part of or supporting Taliban or al Qaeda forces, or associated forces engaged in hostilities against the United States or its coalition partners" during the 2001 war in Afghanistan or elsewhere.

Most of the people held at Guantanamo Bay were picked up on the battlefields in Afghanistan and have been held for questioning aimed mainly at gathering intelligence that could prevent another terrorist attack against the United States. Human rights groups have challenged the Bush administration's position that the detainees can be held indefinitely without being charged.

The 594 people held there are from 40 countries and speak 17 different languages, England said. He said the names of those who choose to go before a military panel to challenge their status as "enemy combatants" probably will not be made public.

The Pentagon has yet to work out many details about providing detainees access to civilian courts and lawyers.

England, who visited Guantanamo Bay on Thursday, said he assumes that some detainees will choose not to appear before the military panel to challenge their "enemy combatant" status and that the entire process can be completed within four months.

Each panel will be comprised of three "neutral" military officers, of which one must be a military lawyer. They will be chosen by McGarrah beginning next week. He also will choose a "personal representative" to assist each detainee in preparing for the panel, England said.

The personal representative will not be a lawyer, England said. He or she will be a military officer of the rank of major or higher (lieutenant commander or higher in the case of a Navy officer). None of the three is to have been involved in the detention or interrogation of the detainee.

England said the detainees who choose to appear before a panel will be allowed to call witnesses, if that is deemed a reasonable request. England said he doubted that many such requests would be deemed reasonable and that detainees instead would present written statements from witnesses.

The annual reviews announced in February are still set to go forward.

The annual reviews and military panels are separate from a more elaborate military tribunal, which the Pentagon calls a military commission, that was established by President Bush in 2002 and is designed to conduct trials of non-American terrorist suspects at Guantanamo Bay. No such trials have been held yet, although the U.S. government has designated 15 people at Guantanamo Bay as eligible for trial.