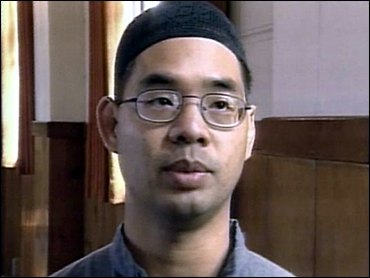 The military chaplain now held on suspicion of trying to pass secrets to terrorist detainees was once a public face of the Bush administration's effort to assure Muslims that they were not the targets of the war on terrorism.

At first, the Army said it arrested Army Capt. Yousef Yee, one of only 12 Muslim chaplains in all the U.S. military, because of "suspicious behavior" at a customs checkpoint and the discovery of unauthorized files in his bags, reports CBS News Correspondent Jim Stewart.

Now, officials say they actually began focusing on Yee earlier as part of a larger espionage investigation at the maximum security prison for suspected terrorists in Guantanamo Bay, Cuba.

According to the Los Angeles Times, Yee was mentioned in a U.S. Embassy news release after the Sept. 11 attacks. He was also the subject of a Voice of America profile.

Now, Yee, 35, is in a military brig in South Carolina, where he can be confined under the Uniform Code of Military Justice for up to two months without being charged.

Before his arrest on returning to the states two weeks ago, Yee was interviewed by 60 Minutes II Correspondent Vicki Mabrey for a report on Guantanamo prisoners that will air 8 p.m. ET/PT Wednesday.

"In general, I would say the American public has a lot to learn about Islam," he told Mabrey.

Yee, who ministered to suspected al Qaeda terrorists at a U.S. detention center in Cuba, was arrested Sept. 10 in Jacksonville, Fla.

What landed him in custody is what the FBI found in his baggage, namely several classified documents he was not authorized to carry plus diagrams indicating which Guantanamo officials had interrogated individual prisoners and what questions they had asked, reports CBS' Stewart.

They also seized Yee's laptop computer and modem, which he used to check Islamic websites for daily prayer times.

Col. David McWilliams, spokesman for U.S. Southern Command, which oversees the Navy base at Guantanamo Bay, Cuba, said Sunday in a telephone interview from command headquarters in Miami that military authorities are awaiting the investigation's outcome.

McWilliams refused to characterize in any way what Yee is suspected of having done. He said the chaplain raised the suspicions of U.S. Customs officials when he arrived in Jacksonville on a flight from Guantanamo Bay.

On Sept. 15 a military magistrate determined that there was sufficient reason to hold Yee in confinement, McWilliams said, pending outcome of the investigation.

Yee is being held in a Navy brig in Charleston, S.C. — the same place where officials are holding Yaser Esam Hamdi, an American-born Saudi who allegedly fought with the Taliban in Afghanistan, and Jose Padilla, a former Chicago gang member charged with plotting to detonate a bomb.

McWilliams said a military lawyer has been assigned Yee, but the spokesman would not identify the lawyer.

Maj. Gen. Geoffrey Miller, commander of Joint Task Force-Guantanamo, the military organization that runs the detention center at Guantanamo Bay, will decide on the next step in the Yee case after he receives results of the Pentagon investigation, McWilliams said.

If charges are brought, Miller could decide to proceed to a court-martial, recommend administrative action or opt not to pursue any charges.

Born in Springfield, N.J., to Chinese immigrants, Yee was raised a Lutheran. He graduated West Point in 1990, attended airborne school and helped operate Patriot missile batteries in the Gulf War. Then he left the Army.

He apparently converted to Islam in 1991, according to The Times. After leaving the service, he traveled to Syria, married a local woman and changed his first name James to Yousef, reports The Times.

Yee subsequently returned to the military as one of the 17 Muslims among its 3,150 chaplains.

He told the Seattle Post-Intelligencer: "Most people want to know how Sept. 11 fits into Islam. What happened is un-Islamic and categorically denied by a great majority of Muslim scholars around the world."

He was transferred to Guantanamo Bay in November.

Once at Guantanamo, Yee made his presence known right away.

He made sure every Muslim prisoner had a copy of the Koran, held Friday prayer services, shifted the meal schedule to allow fasting during Ramadan, and played the call to prayer five times a day over prison loudspeakers. He also explained Muslim practices to non-Muslim soldiers through the base newspaper, reports The Times.

Muslim groups have shown concern over the arrest and detention. One suggested the documents may have had an innocent purpose.

Ibrahim Hooper of the Council on American-Islamic Relations told The Times he hoped "that the case is not enveloped in a shroud of secrecy in terms of secret tribunals and secret evidence."