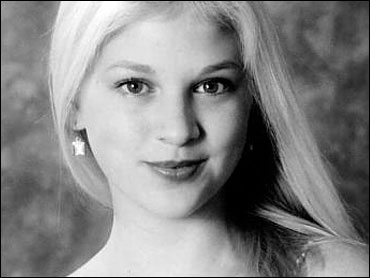 Haaser said she was making a statement on behalf of gay and lesbian students because she was bothered by the verbal and physical harassment they face.

Their principal said he respected what the heterosexual students were trying to do, but they needed to learn more appropriate ways to make a point. Haaser and Pecore were suspended for two days.

"It's highly inappropriate to stand on a table in the cafeteria and make out, whether the kiss was heterosexual or homosexual," said River Hill High School principal Scott Pfeifer. "I don't think there's a school in the country where parents would consider that appropriate behavior."

Haaser, a junior, said she chose to make the statement as part of an English class assignment, which required that she engage in a nonconformist act in the tradition of Henry David Thoreau and Ralph Waldo Emerson.

"You hear derogatory comments in virtually every class," Haaser said. "It's not always spiteful — someone might say, 'Oh that's so gay,' where 'gay' means stupid or dumb. But those comments can be really hurtful."

River Hill administrators said they pride themselves on the school's respect for diversity. Pfeifer said the school has a Gay-Straight Alliance club and a diversity committee of students, teachers and parents. The school recently celebrated National Coming Out Day.

"I wouldn't put up River Hill as a national model," Pfeifer said, "but I would say we are as sensitive about these issues as anyone."

The incident has sparked debate about tolerance at the school.

A few days after the kiss, juniors Mia Freyer and Anna Boyland staged a brief protest outside the school on behalf of the suspended students. They carried signs that read "Down with Homophobia" and "Don't: Hate and discriminate."

Joshua Lamont, a spokesman for the national Gay, Lesbian and Straight Education Network, said there are just under 2,000 gay-straight alliance clubs at high schools and the number of clubs grew by 50 percent in the past year.

A third of the students who identified themselves as gay in the survey reported skipping school for fear of verbal or physical harassment.

"I fear harassment is the rule rather than the exception," Lamont said.

"I don't doubt that it happens in our schools as well and we're deeply concerned about the professional response," she said.

Haaser said the kiss has raised awareness of the problem.

"It's been wonderful to see and hear the discussion that have taken place at my school since the kiss. People are a lot more aware of the issue," she said. "And I like to think the hurtful, derogatory comments about gays have subsided, at least for a little while."