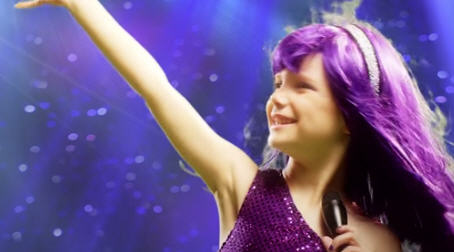 Addy came, saw and conquered cancer -- and now she wants the world to know.

With the help of Make-A-Wish Mid-Atlantic, Addy starred in her own version of Katy Perry's "Roar." The video debuted Monday and quickly racked up more than 100,000 views on YouTube.

She spent the last couple of months in the hospital receiving chemotherapy and radiation treatments.

It was during this time she found inspiration and comfort in dancing and music, particularly to the music of Katy Perry, according to Make-A-Wish Mid-Atlantic. It was the lyrics to "Roar" that inspired Addy to push through the pain.

In the video, Addy can be seen wearing Katy Perry's signature purple hair as she belts out the song's catchy chorus: "Cause I am a champion and you're gonna hear me roar."