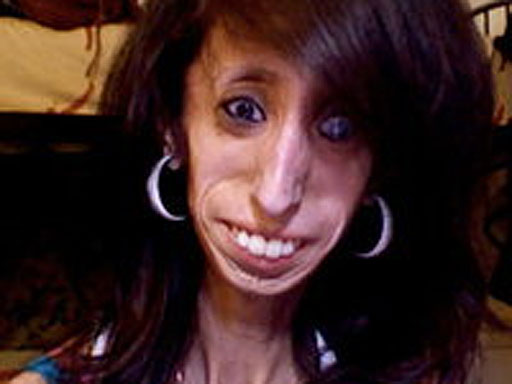 (CBS) For many people, the idea of eating whatever you want without gaining weight sounds like a dream. But it's a life long battle for Lizzie Velasquez, a skeletally thin 21-year-old from Austin, Texas who is unable to put on weight even though she consumes 5,000 to 8,000 calories a day, according to the English paper the Telegraph.

"I weigh myself regularly and if I gain even one pound I get really excited," Valasquez told the Telegraph, which pegs her weight at 56 pounds.

She eats every 15-20 minutes, downing everything from chocolate, pizza, doughnuts, and ice cream, according to the Telegraph. But the 5 foot 2-inch Texan still wears size triple zero clothes - and gets "pretty upset when people accuse me of being anorexic."

Doctors think Velasquez has neonatal progeroid syndrome, a rare condition that causes fat loss in the face and body and accelerated aging, according to the Telegraph. People with the disorder tend to have triangular faces with a beak-shaped nose, prominent veins and sparse scalp hair, according to the website of University of Texas Southwestern Medical School.

"I am aware of a small number of people that have similar conditions to Lizzie but each case is slightly different," Abihimanya Garg, MD, a progeroid expert at the University of Texas Southwestern Medical School told the Telegraph. "We cannot predict what will happen to Lizzie in the future as the medical community are yet to document older people with NPS.

Velasquez was born premature, weighing only 2 pounds, 10 ounces, she wrote on her website.

"I was actually so small that my baby clothes were actually doll clothes from Toys 'R' Us because that's all that would fit me! "

Velasquez is blind in one eye and has limited vision in the other. But she didn't let those problems or the others associated with her condition stop her from being a cheerleader or going to college. And she remains upbeat despite her difficulties and her uncertain prognosis.

"People have asked me if I had a miracle or a chance to change the way I look, I honestly know I would never do that," she wrote. "God made me the way I am for a reason and I would never change that.  I lead a normal life as much as possible and deal with the bumps in the road as they come along with my head held high and a smile on my face!

If that sounds a bit like a motivational speaker, it's because that's what Velasquez hopes to become. She's already on her way.