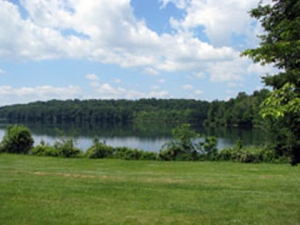 (CBS/AP) CARMEL, NY - A 6-year-old girl was pulled to safety early Monday evening by boaters, after they found her clinging to a corpse in Putnam County's Lake Gleneida, according to local police.

Sgt. John Dearman of the Town of Carmel said that three people were fishing in the lake when they saw the child holding on to an unidentified floating object.

After realizing that the unidentified object was the corpse of a woman, they quickly pulled the girl to safety and called 911.

The girl was taken to a local hospital, and was said to be unharmed.

It appeared that the two had been wading into the water before the woman's death. The Journal News reported that the woman was a friend of the girl's mother.

An autopsy will be performed to determine the cause of Kaner's death. The follow-up investigation will be conducted by the New York City Department of Environmental Protection, according to CBS New York.