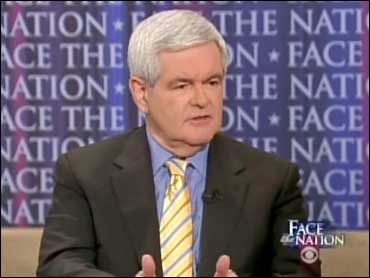 Former House Speaker Newt Gingrich says he still might run for president if supporters will pledge $30 million by November.

"You can't bring all your good ideas if you don't have the resources to communicate," Gingrich told reporters Thursday at a breakfast in Washington.

Gingrich is holding a national Internet-based workshop next week. Afterward, his top political adviser, Randy Evans, will spend October seeing if he can generate pledges of $30 million, which Gingrich said would be needed to compete with the leader in the GOP presidential money chase, former Massachusetts Gov. Mitt Romney.

On Nov. 1, if the pledges pan out, Gingrich will consider running, he said. He didn't say when he would decide but noted that Nov. 6 is one year before the 2008 presidential election and that Nov. 13, when Ronald Reagan announced his candidacy in 1979, is a "propitious" date.

The Republican former speaker had good things to say about the field of presidential contenders:

Former New York Mayor Rudy Giuliani, "a historical figure" as mayor, "would be a very strong candidate" as an alternative to Democratic front-runner Hillary Clinton.

Former Tennessee Sen. Fred Thompson, while making a "goofy" decision to announce his campaign on "The Tonight Show" with Jay Leno, "is a very articulate guy and has the potential to be a national figure."

Arizona Sen. John McCain faces the "hardest problems" but in recent weeks has made a "much more clear" case for his candidacy.

Former Arkansas Gov. Mike Huckabee is relatively unknown but "is as likable as anybody in the race."