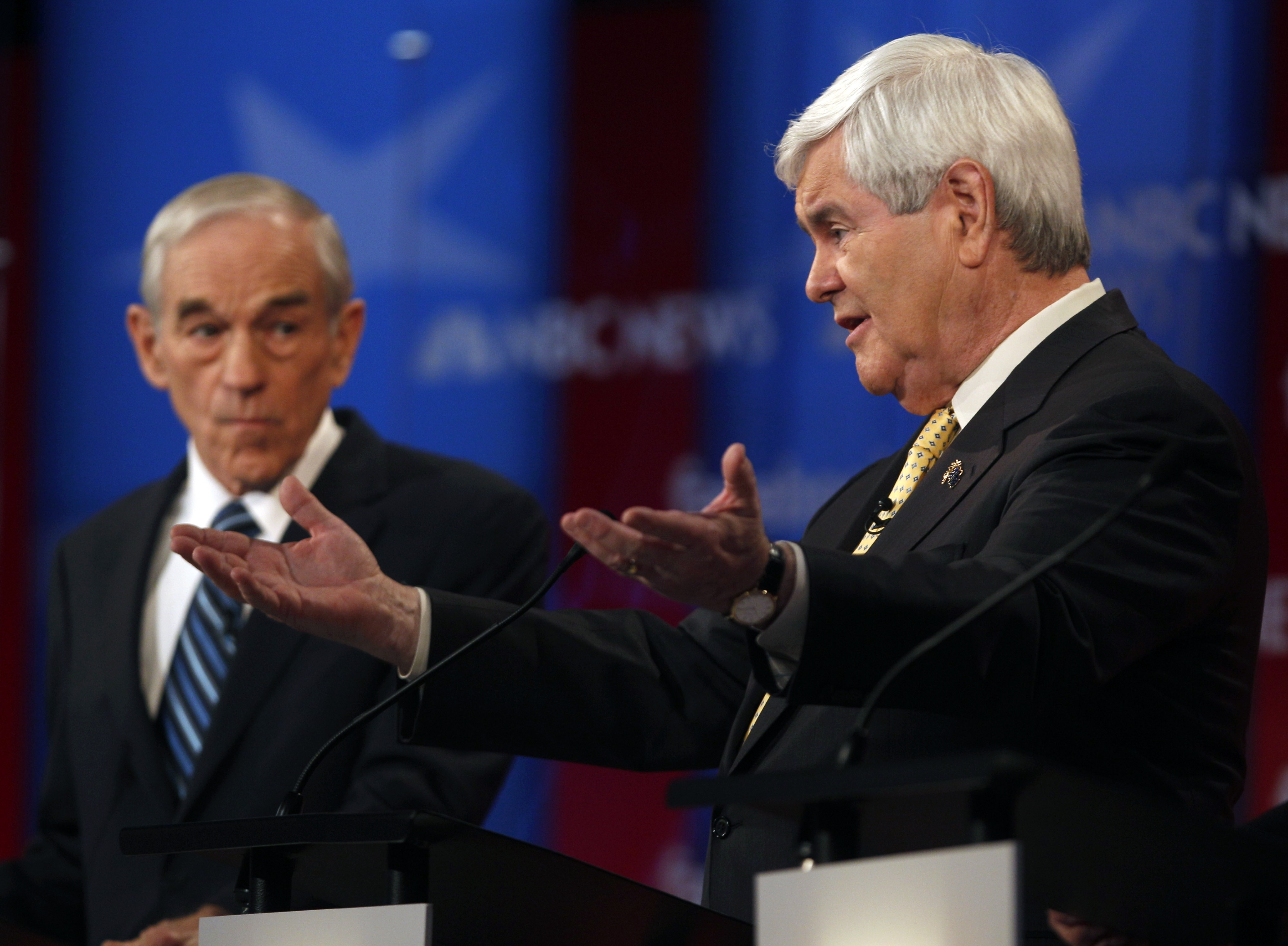 Mitt Romney and Newt Gingrich on Sunday continued to spar over the question of how much say a candidate can have over the ads released by super PACs that support them.

In the second Republican presidential debate within a 12 hour period (the last one, also in New Hampshire, was Saturday night) Gingrich continued his attack on the former Massachusetts governor over a series of ads, released by the pro-Romney PAC "Restore Our Future," for going after Gingrich with some information he claims is false.

"Governor, I wish you would calmly and directly state it is your former staff running the PAC," Gingrich demanded, of the pro-Romney PAC. "It is your millionaire friends giving to the PAC. And you know some of the ads aren't true. Just say that. It's straightforward."

Romney acknowledged that those responsible for the ads are his supporters, but continued to note -- as he has for weeks -- that he is legally prohibited from directing the tone or content of any ads the PAC puts out.

Gingrich to Romney: Drop the "pious baloney"
Santorum, Romney challenged on gay rights in debate
Huntsman fires back at Romney for knocking his service as ambassador to China

Super PACs can spend unlimited funds to support a candidate as long as they do not directly coordinate with the candidate's campaign. As CBS' Phil Hirschkorn reported in December, super PACs could drive campaign spending by independent groups up to $1 billion dollars in the 2012 election cycle - in addition to an estimated $4 billion in expenditures by presidential candidates, congressional candidates and political parties.

"With regards to their ads, I haven't seen them. And, as you know, under the law, I can't direct their ads," he continued. "If there's anything in them that's wrong, I hope they take it out."

Romney then ran through a laundry list of the accusations leveled against Gingrich in the ads before addressing one of the claims -- that Gingrich supported federal funding for some abortions -- that some have deemed dubious.

"If there was something related to abortion that it said that was wrong, I hope they pulled it out. Anything wrong, I'm opposed to," he said. "As you know, that is not my ad. I don't write that ad. I can't tell them how to."

(When asked about Romney's claim that he hasn't seen the ads, having just referred to the content in one of them, Romney adviser Eric Fehrnstrom said after the debate in the spin room that Romney "hasn't seen all of the super PAC ads, but there was one in particular that he saw which he described.")

Both candidates essentially ignored the question, put to them twice, about whether or not they would mutually agree to push for their respective super PACs' ads to be taken down.

"David, wait a second," Gingrich said. "I'm glad finally on this stage, weeks later, he has said, gee, if they're wrong, they should take them down... We've sent a letter in South Carolina saying -- warning the stations to just fact-check them before they start running them. But I'm taking his advice. You know, we started to run his commercial from 1994 attacking Teddy Kennedy for running negative ads. We thought, no, that would be wrong."

Gingrich, in fact, all but endorsed a 27-plus-minute film being produced by the pro-Gingrich PAC "Winning Our Future," about Bain Capital, the company of which Romney was formerly the CEO.

"I can say publicly I hope that the [pro-Gingrich] super PAC runs an accurate movie about Bain," Gingrich continued, referring to Bain Capital, the company of which Romney was formerly the CEO. "It will be based on establishment newspapers, like the Washington Post, the Wall Street Journal, the New York Times, Barron's, Bloomberg News. And I hope that it's totally accurate and then people can watch the 27-and-a-half minutes of his career at Bain and decide for themselves."

A trailer for that film can be viewed at http://www.kingofbain.com/.

Sarah B. Boxer contributed to this report.