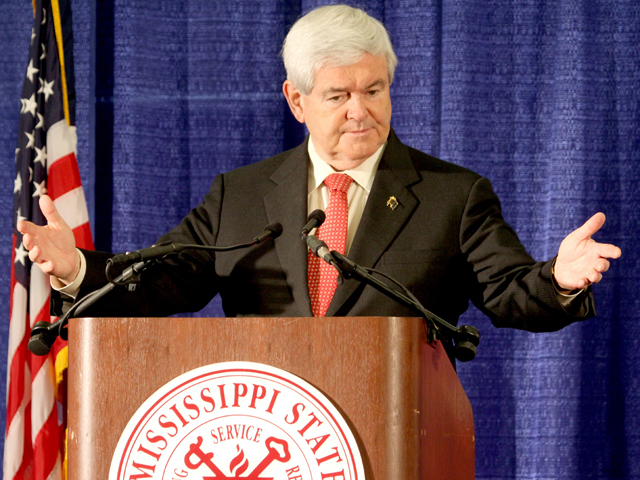 (CBS News) GULFPORT, Miss. - Newt Gingrich on Friday called for the resignation of Defense Secretary Leon Panetta after the Pentagon's top official indicated that the U.S. military would try to seek "international permission" before intervening in Syria. Pentagon officials, however, said Panetta was not trying to override Congress in making such a statement.

Panetta, in testifying earlier this week before the Senate Armed Services Committee, stressed his desire for an international mandate before starting military operations to assist Syrian rebels. The Pentagon subsequently sought to clarify that it would not cede decision-making to a foreign body, but Gingrich interpreted Panetta's remarks differently.

Panetta's comments came in response to a question from Sen. Jeff Sessions, R-Alabama, who said Congress was circumvented when President Obama decided to join the NATO coalition in Libya. "You know, our goal would be to seek international permission" in Syria, Panetta said. "And we would come to the Congress and inform you and determine how best to approach this, whether or not we would want to get permission from the Congress."

The Pentagon pushed back on Gingrich's remarks. Pentagon Press Secretary George Little told Hotsheet that "working with an international coalition is the most pragmatic option given the wide array of serious challenges presented by the Syria crisis," and Little continued that discussions with Congress "should and will continue."

"The President has the authority under the Constitution to act to defend this country," Little said Panetta told Congress.


Gingrich, who has called for the resignations of several cabinet heads, including Energy Secretary Steven Chu and Interior Secretary Ken Salazar, seized on Panetta's comments as an example of what he called the Obama administration's "radical" policies.

The former House speaker is campaigning through Mississippi and Alabama with the hope that wins in both primaries next week will keep his presidential aspirations alive. He has taken to focusing his ire almost solely on Obama.

After stopping by a drilling platform in Laurel, Miss., where he mocked the president for saying that drilling isn't the solution to America's energy problems, Gingrich issued a challenge to the commander-in-chief.

"I want to invite the president to come down to Mississippi and maybe spend part of Monday with me," Gingrich said. "And we can go to a couple of natural gas drilling rigs and he can see for himself, it actually works. It's actually worked historically. It's actually working right this minute."

Gingrich also criticized the president on the unemployment numbers released on Friday, which showed the U.S. adding more than 200,000 jobs for the third consecutive month while the unemployment rate remained unchanged at 8.3 percent. Instead, he called the numbers "totally false."

"His achievement has not been creating jobs, his achievement has been driving people out of the workforce," Gingrich said, referring to the fact that a large number of Americans have stopped looking for work and these numbers are not reflected in the unemployment percentage.