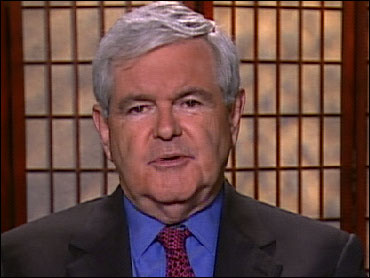 (AP Photo/Evan Vucci)
Former Republican House Speaker Newt Gingrich, who has stayed active in Republican circles since leaving office, told reporters in Virginia last night that he is considering running for president in 2012.

Gingrich and his wife "will look seriously and we'll probably get our family totally engaged, including our two grandchildren, probably in January, 2011, and we'll look seriously at whether or not we think it's necessary to do it," he said, according to the Richmond Times-Dispatch.

"And if we think it's necessary we'll probably do it," Gingrich said. "And if it isn't necessary we probably won't do it."

"I think it's conceivable that by 2012 you could have a second Contract for America," the former Speaker added.

(CBS)
The Contract With America was crafted by Gingrich and other Republicans in 1994 and helped propel the GOP to a majority in both houses of Congress. It outlined a number of promises, many related to taxes and spending.

On CBSNews.com's "Washington Unplugged" last week, Gingrich said the GOP "got off track, it failed to perform, and it got fired."

"That's the great genius of America, if you don't do your job, the customer gets to choose somebody else," he continued.

Gingrich toyed with a run for the GOP nomination in 2008 but ultimately decided against it. Last night, he explained his attitude towards working with President Obama and Congressional Democrats: "Cooperate when you can, offer a better solution when possible, stop something only if you have no alternative."

In late 1995, Gingrich was a key player in the shutdown of the federal government. His budget battle with then-President Bill Clinton ultimately hurt Gingrich's public image, thanks in part to reports that he had engineered the shutdown in part because he did not like the seat he had been given during a flight on Air Force One.

In his comment last night, Gingrich discussed his opposition to federal spending under President Obama, saying that he "know[s] of no experience in the last 50 years where a big-government spending program has successfully restarted the economy."