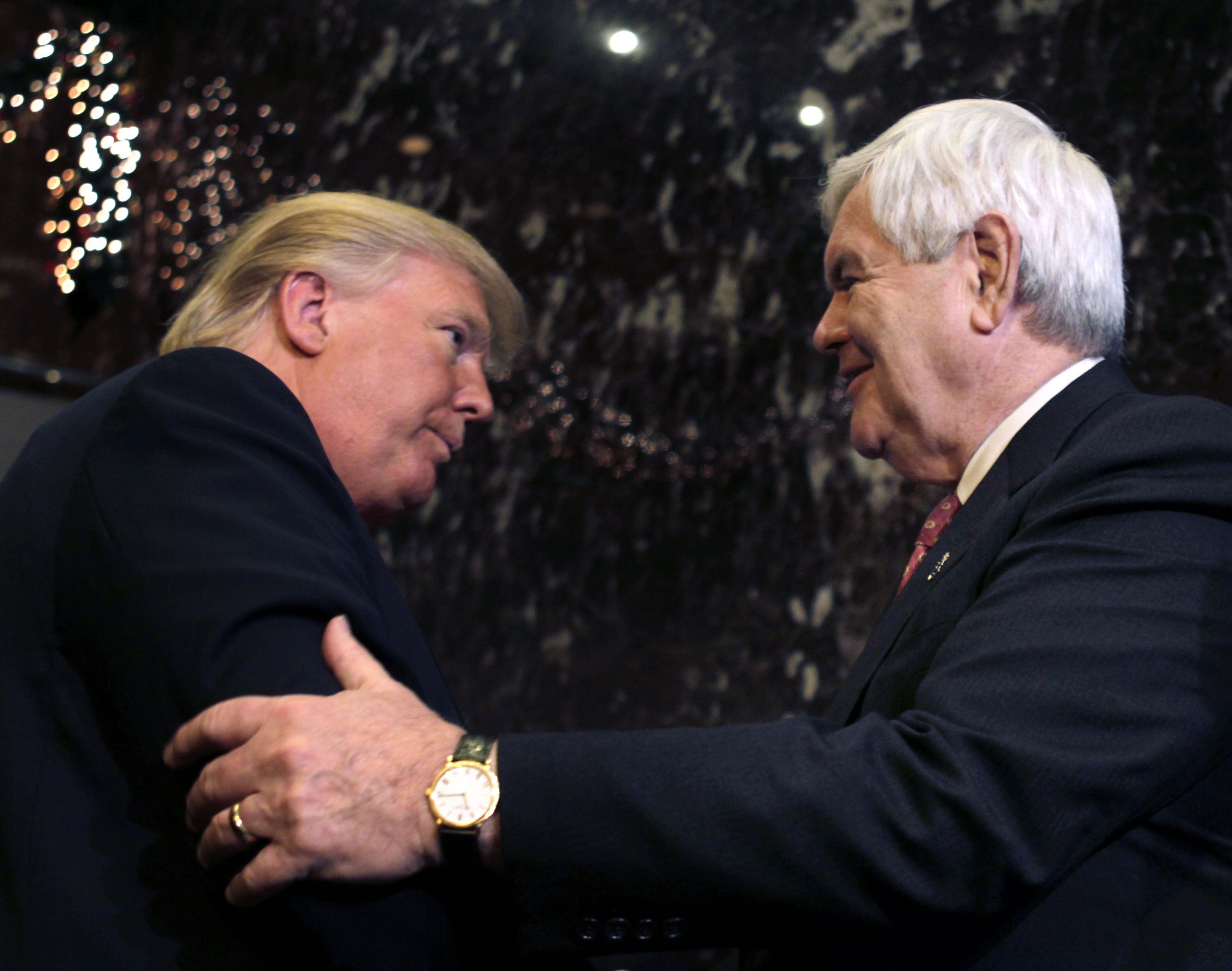 NEW YORK -- Republican presidential contender Newt Gingrich paid a courtesy call on Monday to real estate magnate Donald Trump in what has become an obligatory stop for some GOP hopefuls in 2012. He called Trump "a genuine American icon."

After their late-morning meeting, Gingrich said he and Trump discussed ways of creating jobs for poor children, an issue that got the candidate in hot water last week when he suggested that poor kids have no working role models except those that are "illegal." Gingrich said he asked Trump, the host of the reality show The Apprentice, to offer apprenticeships to 10 children in the poorest New York City schools.

Trump said he would take Gingrich up on the idea and said of the candidate, "It's amazing how well he's doing and how (his campaign is) really resonated with so many people."

Trump is hosting a debate for the Republican presidential candidates on Dec. 27, although two of them--former Utah Gov. Jon Huntsman and Rep. Ron Paul of Texas--have announced they will not attend because they don't consider it a serious debate forum. Paul said it would contribute to a "circus-like" atmosphere of the primary campaign. One of the major themes of Trump's short-lived presidential campaign this year was whether or not President Obama is a U.S. citizen.

Trump is clearly miffed at Paul's debate snub. "I've built a tremendous net worth. I've made - I've employed thousands and thousands of people - jobs, education, real health care - I mean, real health care. And we've done a great job and everybody else seems to like it. And besides that and in all due respect - and this is from me and not the speaker - Ron Paul has zero chance of getting the nomination," Trump said.

Gingrich said of Paul's comments on the Trump debate, "I'm actually very surprised that one of my friends would have said that. This is a country that elected a peanut farmer to the presidency, that elected an actor who had made two movies with a chimpanzee to the presidency. This is a country of enormously wide open talent. Donald Trump is a great showman. He's also a great businessman," he said. "If we're trying to figure out how to create jobs, I think one of the differences between my party and the other party, is we actually go to people who know how to create jobs to figure out how to create jobs. And so when I was asked whether or not I was willing to be in that kind of a debate, I automatically said yes. I think that we have to be open to new ways of doing things and new ways of approaching things."

Gingrich said he found the flamboyant Trump to be "a genuine American icon in his own right."

"Why wouldn't you want to come and hang out?" Gingrich said, adding that "I like being in New York at Christmas. I mean the city at Christmas is just magnificent."

Gingrich also softened his rhetoric of last week, when he predicted he would be the Republican nominee for president. "I think that's up to the American people, but my hope is that as we keep talking about solutions and we keep talking about substance that we have a real chance to win the nomination," he said Monday.