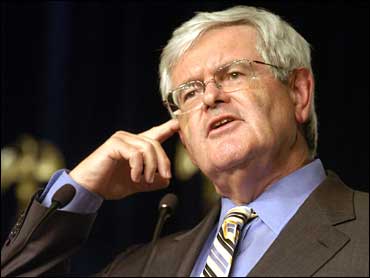 Former House Speaker Newt Gingrich was having an extramarital affair even as he led the charge against President Clinton over the Monica Lewinsky affair, he acknowledged in an interview with a conservative Christian group.

"The honest answer is yes," Gingrich, a potential 2008 Republican presidential candidate, said in an interview with Focus on the Family founder James Dobson to be aired Friday, according to a transcript provided to The Associated Press. "There are times that I have fallen short of my own standards. There's certainly times when I've fallen short of God's standards."

Gingrich argued in the interview, however, that he should not be viewed as a hypocrite for pursuing Clinton's infidelity.

"The president of the United States got in trouble for committing a felony in front of a sitting federal judge," the former Georgia congressman said of Clinton's 1998 House impeachment on perjury and obstruction of justice charges. "I drew a line in my mind that said, 'Even though I run the risk of being deeply embarrassed, and even though at a purely personal level I am not rendering judgment on another human being, as a leader of the government trying to uphold the rule of law, I have no choice except to move forward and say that you cannot accept ... perjury in your highest officials."

Widely considered a mastermind of the Republican revolution that swept Congress in the 1994 elections, Gingrich remains wildly popular among many conservatives. He has repeatedly placed near the top of Republican presidential polls recently, even though he has not formed a campaign.

Gingrich has said he is waiting to see how the Republican field shapes up before deciding in the fall whether to run.

Sen. Hillary Clinton, D-N.Y., has had to explain her cheating husband. For Sen. Barack Obama, D-Ill., it's everything from unpaid parking tickets to drug use.

Republican Rudy Giuliani is addressing a rift with his son after the former New York City mayor's ugly divorce.

Frank Luntz, a Republican pollster, tells Axelrod that in the post-Bill Clinton era, voters assume their candidates have done something they're not proud of. So, it's not what they've done, but how they explain it.

Reports of extramarital affairs have dogged Gingrich for years as a result of two messy divorces, but he has refused to discuss them publicly.

Gingrich, who frequently campaigned on family values issues, divorced his second wife, Marianne, in 2000 after his attorneys acknowledged Gingrich's relationship with his current wife, Callista Bisek, a former congressional aide more than 20 years younger than he is.

His first marriage, to his former high school geometry teacher, Jackie Battley, ended in divorce in 1981. Although Gingrich has said he doesn't remember it, Battley has said Gingrich discussed divorce terms with her while she was recuperating in the hospital from cancer surgery.

"There were times when I was praying and when I felt I was doing things that were wrong. But I was still doing them," he said in the interview. "I look back on those as periods of weakness and periods that I'm ... not proud of."

Gingrich's congressional career ended in 1998 when he abruptly resigned from Congress after poor showings from Republicans in elections and after being reprimanded by the House ethics panel over charges that he used tax-exempt funding to advance his political goals.

Florida lawmaker says Biden will "learn" if anyone tries takes away guns
Thanks for reading CBS NEWS.
Create your free account or log in
for more features.
View CBS News In
CBS News App Open
Chrome Safari Continue
Be the first to know
Get browser notifications for breaking news, live events, and exclusive reporting.