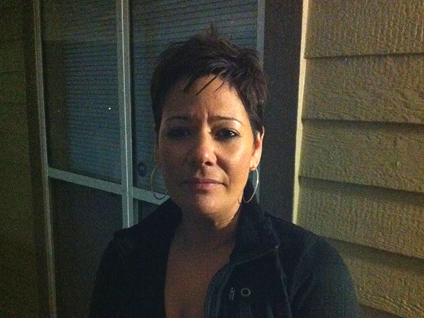 Ginger White, the woman alleging she had a 13-year sexual affair with Herman Cain, apologized Thursday to Cain's wife and their children for her actions, which could end up putting the nail in the coffin on the Republican businessman's bid for the White House.

"I am not a cold-hearted person. I am a mother of two kids. And of course my heart bleeds for this woman because I am a woman and being in a situation like this can not be fun," White said on MSNBC.

"And I am deeply, deeply sorry if I have caused any hurt to her and to his kids, to his family. That was not my intention. I never wanted to hurt anyone and I'm deeply sorry. I am very sorry," she told host Lawrence O'Donnell.

The candidate is set to meet late Friday with Gloria Cain for the first time since White's allegationsbecame public to decide whether to press on with his campaign.

Asked by the New Hampshire Union Leader if he would drop out of the race if Gloria asked him to, he immediately said he would.

Cain's standing in public opinion polls was falling after revelations that he been accused of sexual harassment and engaging in inappropriate behavior with several women.

But the revelation Monday that Ginger White claimed to have had a long-standing affair with Cain changed the minds of many Cain backers who had been on the fence, including two New Hampshire state lawmakers who were backing Cain and jumped ship to support former House Speaker Newt Gingrich.

Just eight percent of likely Republican voters at the Jan. 3 Iowa caucuses support Cain, according to a poll released Friday by the Des Moines Register. That is about a third of the 23 percent support Cain had just over a month ago.

Cain said he would "reassess" his candidacy as his campaign donations plummet. The former Godfather's Pizza chief executive did not cancel a campaign stop in Rock Hill, S.C., Friday that is scheduled to take place before his meeting with his wife in their home near Atlanta. He did cancel a planned Friday night appearance at the Atlanta Athletic Club.

White said the affair was purely sexual and not about love and neither ever said "I love you" to the other.

"It wasn't a love affair. It was a sexual affair, as hard as that is for me to say and as hard as it is for people to hear it. You know, it pretty much is what it is. And that's what it was," she told MSNBC.

Cain and White have both said he gave her money to help her pay her bills as she struggled financially. Cain says their relationship was merely a "friendship."

Earlier in the week, in an interview with ABC's George Stephanopolous, White said "this was not sex for money."