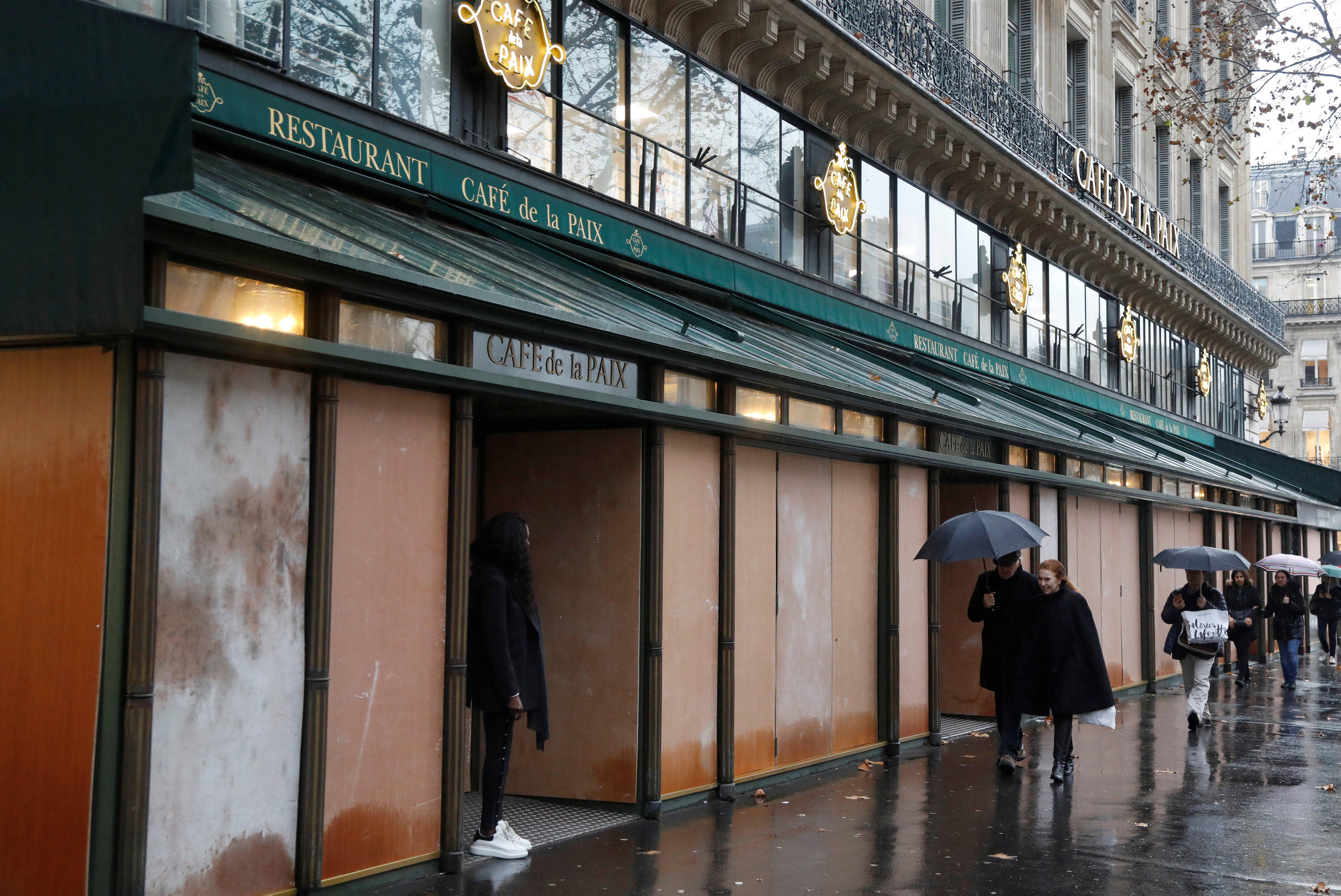 PARIS -- Anticipating a fourth straight weekend of violent protests, France on Friday mobilized armored vehicles and thousands of police, cordoned off Paris' broad boulevards and made plans to shut down tourist sites like the Eiffel Tower and Louvre. Some 8,000 officers and 12 armored vehicles will be deployed in Paris alone, where shops have been boarded up and sites like the Eiffel Tower closed, BBC News reports.

The heavy security will put central Paris in a virtual lockdown Saturday against what the interior minister called "radicalized and rebellious people," who authorities believe will join members of the "gilets jaunes," or "yellow vest," movement that has been holding anti-government demonstrations.

Nationwide, about 89,000 police will fan out in the streets, an increase from 65,000 last weekend, when more than 130 people were injured and over 400 arrested as the protests degenerated into the worst street violence to hit the French capital in decades.

Fearing increasing violence, hundreds of businesses planned to close Saturday, preferring to lose a key holiday shopping day rather than have stores smashed and looted, like they were a week ago when protests over rising taxes turned into a riot. Workers hammered plywood over the windows of shops and businesses, making the plush Champs-Elysees neighborhood appear to be bracing for a hurricane.

"According to the information we have, some radicalized and rebellious people will try to get mobilized tomorrow," Interior Minister Christophe Castaner told a news conference. "Some ultra-violent people want to take part."

BBC News' Lucy Williamson in Paris reports the "gilets jaunes" protesters' core aim is to highlight the economic frustration and political distrust of poorer working families. The group still has widespread support: An opinion poll on Friday saw a dip in that support, but it still stood at 66 percent.

President Emmanuel Macron met Friday night with about 60 anti-riot security officers who will be deployed in Paris. He made the unannounced visit, without the press, to a fort used as military accommodation in Nogent-sur-Marne, east of Paris, and thanked the officers for their work.

The barricade-busting armored vehicles could be used for the first time in a French urban area since riots in 2005.

"These vehicles can be very useful to protect buildings," said Stanislas Gaudon, head of the Alliance police union. "And in case they set up barricades, we can quickly clear out the space and let our units progress."

Police removed any materials from the streets that could be used as weapons, especially at construction sites in high-risk areas. Those included the renowned Champs-Elysees, which would normally be packed with tourists and shoppers.

"It's with an immense sadness that we'll see our city partially brought to a halt, but your safety is our priority," said Mayor Anne Hidalgo. "Take care of Paris on Saturday because Paris belongs to all the French people."

As it did last weekend, the U.S. Embassy advised Americans to avoid the demonstrations.

Prime Minister Edouard Philippe met Friday night with representatives of the movement to try to open a dialogue.

The seven "yellow vest" invited to the meeting said they were satisfied from the discussion. One participant, Christophe Chalancon, told reporters the prime minister "listened to us."

Since the unrest began Nov. 17 in response to a sharp increase in diesel taxes, four people have been killed in protest-related accidents. Now the demands of the "yellow vest" movement - named for the fluorescent safety gear that French motorists keep in their cars - is pressing for a wider range of benefits from the government to help workers, retirees and students.

Macron on Wednesday agreed to abandon the fuel tax increase, but the protesters' anger at his government has not abated. Macron, since returning from the G-20 meeting last weekend, has kept largely out of sight, a move that has puzzled supporters and critics.

He has left his unpopular government to try to calm the nation. In response, "Macron, resign!" has become the main slogan of the "yellow vest" demonstrators.

The 40-year-old leader mostly spent the week holding closed-door meetings in the Elysee presidential palace, and many protesters consider him to be hiding from the people.

Students opposing changes in key high school tests protested again Friday, a day after video that was shared widely on social media showed the arrest of high school pupils outside Paris and prompted an outcry. Trade unions and far-left parties have lashed out at perceived police brutality.

The images, filmed Thursday at Mantes-la-Jolie, showed students on their knees with their hands behind their head, being watched over by armed, masked police.

Castaner, the interior minister, said 151 people were arrested in the small town, some carrying weapons. He said no students were injured.

The rioting has also had an economic impact at the height of the holiday shopping season. Rampaging groups last weekend threw cobblestones through Paris storefronts and looted valuables in some of the city's richest neighborhoods.

The national Federation of French markets said that Christmas markets have been "strongly impacted" and that its members registered "an average fall of their estimated figures between 30 and 40 percent since the beginning of the yellow vest movement."

Six French league soccer matches were canceled around the country. The Nicolas wine chain, one of France's biggest retailers, canceled all its wine tasting sessions scheduled for Saturday.

In addition to the closure of the Eiffel Tower, many shops and museums across Paris, including the Louvre, the Orsay Museum and the Grand Palais, will be shut on Saturday for safety reasons. Music festivals, operas and other cultural events in the capital were canceled.