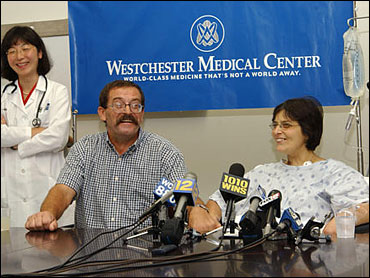 Teddy Mocibob gave up smoking and drinking, then he did a little gambling.

He surrendered 60 percent of his liver to his wife, Elena, despite doctors' warnings of the possible risks to his health and even his life - and having to cast aside his longtime vices.

"They said we were a 100 percent match and I said `Set up the date and let's go,'" Mocibob recalled Friday. "I love her. If I had to do it again next week, I would do it."

There won't be any need for that, since doctors have declared the July 29 procedure a success.

In three months, she said, the transplanted piece of liver that Elena Mocibob received will regenerate to 90 percent of normal size.

Elena, 43, who suffered from a liver disease, would have lived only a few years without a transplant, doctors said.

Before her husband could be a donor, he had to be in good enough health to withstand the surgery and recovery. That meant a cold turkey approach to alcohol and tobacco, habits he picked up in his native Croatia.

Teddy Mocibob, 50, who speaks with a heavy accent, said he knew he could give it all up for her.

Sheiner said it was clear that Teddy Mocibob was willing to do anything for his wife, but that wasn't enough.

"We have to make sure they know the risks," she said.

Potential donors undergo significant screening for more than just physical readiness. Criteria such as how they will handle the emotional and psychological impact of the procedure, and basics like whether they can afford to be out of work for months and if children depend on them also are evaluated.

The intensive screening process was put in place statewide after the death last year of a donor who gave part of his liver to his brother at a New York City hospital.

The Mocibobs have been married less than four years and their four children, all teenage or older, are from previous marriages.

Mocibob, who now has a large Y-shaped scar on his chest, walked slowly into a news conference and sat gingerly. He was released from the hospital August 4.

"I don't think I'll go back to smoking," Mocibob said. "Drinking, I might have a beer or two."

His wife, her skin still slightly yellow, was in a wheelchair and hooked up to an intravenous tube. She will leave the hospital on Monday.

She said she was most looking forward to holding her granddaughter.

"Before, I wasn't able to do anything with them," she said of her grandkids, ages 5 and 2.

Her daughter, Helen Curtin, said she was deeply grateful to her stepfather. Her children "have never seen my mother healthy," she said.

More than 90 percent of all liver transplants are done from cadavers. Of live donations, there's only about one case a year nationwide involving husband and wife.

Elena said she worried about accepting her husband's gift, but said she joked that a main concern was waking up with an accent like his.

In the end, though, Teddy's decision didn't surprise her.