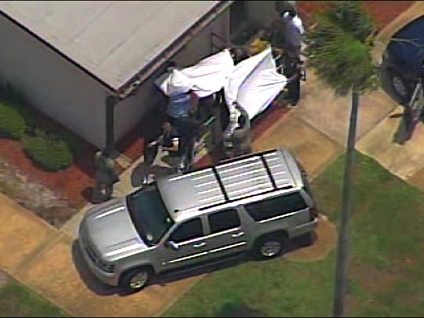 CAPE CANAVERAL - Rep. Gabrielle Giffords arrived in Florida to see her husband's space shuttle launch in another important step in her long recovery from a bullet wound to the head suffered at a political event nearly four months ago.

The plane landed shortly before 1 p.m. at Patrick Air Force Base in Cape Canaveral.

Her husband, Mark Kelly, is leading the shuttle crew that is set to lift off on Friday in an event that President Barack Obama will also attend. Kelly arrived at NASA's launch site Tuesday to prepare for the nation's next-to-last space shuttle mission.

"It's something she's been looking forward to for a long time," Kelly said of his wife's attendance at the launch. "She's been working really hard to make sure that her doctors would permit her to come. She's more than medically ready to be here, and she's excited about making this trip."

Mike Moses, director of shuttle integration at the Kennedy Space Center told CBS News space analyst William Harwood that they will treat Giffords' trip "just like a crew family visit. She needs a little extra care and attention. There's going to be a lot of extra, outside attention placed on it, but from a what-we're-doing (standpoint), she's NASA family and we're treating her just like we do all the rest of the crew families."

Crew families typically watch shuttle take offs from the roof of the Launch Control Center 3.4 miles from the pad. A crane was parked by the building Wednesday and workers could be seen hauling material of some sort to the roof.

The other VIP — President Barack Obama — will arrive on launch day. He'll bring his wife and two daughters in what will be the first visit by a first family for a launch. Only two other sitting presidents have ever witnessed a manned launch: Richard Nixon for Apollo 12 in 1969 and Bill Clinton for John Glenn's return to orbit in 1998 aboard shuttle Discovery.

With only two space shuttle launches remaining, everyone, it seems, is jostling for a front-row seat.

An estimated 40,000 guests are expected at Kennedy Space Center on launch day. Outside the gates, the crowd is expected to be the biggest in years, if not decades.

Between 500,000 and 750,000 people are expected to jam roadways for the 3:47 p.m. liftoff. That's nearly twice the crowd that descended for Discovery's last launch in February.

Hundreds of additional journalists have already dropped into Kennedy Space Center, with satellite trucks and temporary trailers filling every available spot at the NASA press site.

Giffords' shooting during a meet-and-greet in Tucson and her rehabilitation in Houston — home to Kelly and the rest of NASA's astronaut corps — have overshadowed the details of Endeavour's flight.

Endeavour and its six-man crew are bound for the International Space Station. They will deliver a $2 billion physics experiment and a load of spare station parts. Four spacewalks are planned during the 14- to 16-day mission.

Good weather is forecast for the launch: an 80 percent chance.

No public appearances or statements by Giffords are planned. She will return to her rehab hospital in Houston soon after the launch, according to her staff.

The 40-year-old congresswoman was expected to join in the traditional barbecue with all six astronauts and their immediate families Wednesday evening. The secluded beach house, enjoyed by astronauts during countdowns, is on restricted government property.

As for Kelly, he remains "very, very focused," said launch director Mike Leinbach. Kelly left flight training after the shooting, but after a monthlong leave, returned to work in Houston.

Giffords will watch the launch in private — as do all crew families. She saw her husband's shuttle launch in 2006, before they were married, and again in 2008.

Almost certain to be at her side: brother-in-law Scott, her husband's identical twin. He, too, is an astronaut and, in fact, is just back from his own space station mission.

Her two teenage stepdaughters, from Kelly's previous marriage, also will be there.

It's likely that the Obamas will be positioned near the congresswoman, who is said to be making remarkable progress with every passing day. Her doctors on Monday formally approved her trip to Florida.

Giffords has not been seen publicly since she was shot in the head, and has been relearning how to speak, walk and take care of herself. In recent newspaper and TV reports, her doctors and husband said she speaks slowly, using single words or phrases, and can stand on her own and walk a little. She is using her left hand to write because she has limited use of her right side.

Officials insist the launch team will not be distracted by all the fanfare surrounding Giffords and Obama's visit. Leinbach assigned others the task of managing the details surrounding the president and congresswoman, and as of midday Wednesday, said he had no idea where they would view the launch.

The launch control center is a possibility, he noted. Even his chair in the firing room?

"No," Leinbach assured reporters. "I can tell you where he won't be. I don't want to do his job, and I'm sure he wouldn't want to do mine."

After the flight, Endeavour will be decommissioned and sent to the California Science Center in Los Angeles. The Kennedy Space Center is keeping Atlantis for display, following its summertime flight to close out the 30-year shuttle program. Discovery is bound for the Smithsonian Institution.

Keeping Atlantis takes away some of the sting of shutting down the program and laying off so much of the workforce, without a clear path forward, Leinbach said.

Obama canceled the back-to-the-moon program proposed by former President George W. Bush and put NASA on a path toward asteroids and Mars, while encouraging private companies to take over the Earth-to-orbit business. Space entrepreneurs predict it will take three years to launch a commercial spacecraft, with astronauts on board, to the space station; some insiders worry it could be a full decade.

"It's like breaking up a family," Leinbach said of the shuttle workforce. "It's tough to deal with it. But we're moving on and we're going to fly these last two missions safe and bring the crews home, and then that will be it."

Kelly revealed the news that Giffords would attend the launch in an interview with CBS News' Katie Couric earlier this week, saying that her recovery was going well and that her personality was "100 percent there."

"I think she said, 'awesome' and she pumped her fist one more time" upon hearing the news that she could attend the launch, Kelly told Couric in an interview broadcast Monday.