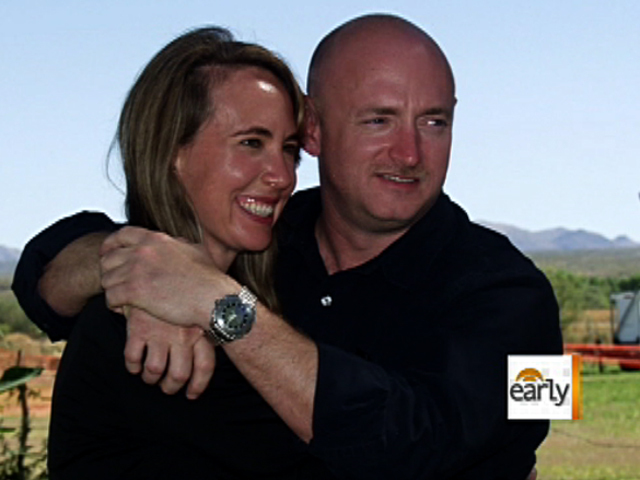 Two months after being shot in the head by a would-be assassin, Rep. Gabrielle Giffords has recovered to the point where family, friends and doctors are seriously entertaining the hope that she will be able to attend her husband's space shuttle launch in April.

Mark Kelly will be commanding space shuttle Endeavor's mission, set to blast off April 19. According to one of the doctors who saved her life in Tucson, there's "no reason not to" believe she can continue her remarkable recovery and witness that moment.

"She's doing well and she can only get better," Dr. Peter Rhee, the chief of trauma at the University Medical Center in Tucson told CBS News' John Blackstone.

Appearing on "The Early Show" Tuesday, Dr. Gerard Francisco, the physician in charge of Giffords' rehab at TIRR Memorial Hermann hospital in Houston couldn't definitively say whether the congresswoman would be in attendance, but didn't rule out the possibility.

"I cannot say anything for sure at this point. We still have some time to go. Perhaps in the nest few weeks we'll be able to determine whether or not it will be safe for her to go to this launch," he said.

"It's an outstanding goal that the family has for her. When our patients are in our rehab hospital, we identify goals with them. And together as a team, we work together in achieving those goals. So we want to make sure that when the time comes for the shuttle launch, if they decide to take her there, that she will be ready to participate in that activity."

Giffords is still missing a part of her skull and wears a helmet for protection. Friends say she spends a lot of time fiddling it and though she doesn't like it, she knows it is necessary, reports Blackstone. At some point, surgeons will seek to repair her skull, but no procedures are immediately planned.

Francisco said that using music to aid patients' therapy can be common.

"That is one of the most fascinating phenomena in recovering from a neurologic insult. We're not really sure what the reason is. There are different theories as to why this is the case. One, it could be part of the brain that governs language is different from the one that governs singing or music. Or they can be in the same location but it might be easier to recall music ... Since they're overlearned, it's easier for one person to rather those rather than speak it."

Nurse Tracy Culbert , who cared for Giffords in Tucson and was on the flight that took her to Houston six weeks ago, returned to Houston last weekend for an emotional reunion with her former patient.

She was so excited to see me and we had a great conversation," she said. "We ate lunch together and she was super excited. We gave each other a big hug and held hands."