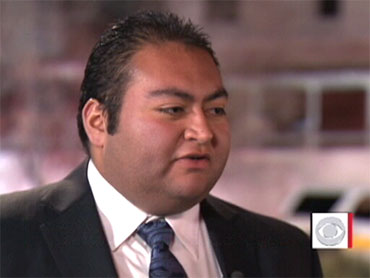 TUCSON - In the chaotic seconds after the shooting erupted Saturday, a University of Arizona student who had just begun an internship in Rep. Gabrielle Giffords' office sprang into action.

Daniel Hernandez, 20, had trained as a certified nurse's assistant, and many credit his quick actions with saving the congresswoman's life when she was shot in the head.

On "The Early Show" this morning, Hernandez described the sequence of events Saturday. As gunfire rang out, he ran toward the noise.

"With it being [the] congresswoman I knew that if there was a gunman that she would likely be a target," Hernandez told anchor Erica Hill. "I wanted to make sure if she or anyone around her were injured, that I provide her with whatever assistance I could until the EMTs could get there."

Given his nurse's assistant training Hernandez said his first order of business was to try and assess who among those shot was still alive: "Trying to check for pulses, trying to see who was still breathing. I was able to check two or three people before I noticed that the congresswoman had been hit.

"Once I noticed that the congresswoman had been hit, that became my top priority, not because of her position but because of the severity of her wounds because she had been shot in the head."

A bullet had passed through the left side of Giffords' head, exit through the front. Dr. Peter Rhee, trauma director at the University of Arizona Medical Center, said, "When you get shot in the head and the bullet goes through your brain, the chances of you living is very small."

Hernandez said when he first got to the congresswoman, "she was slumped over, but in the position she was in, there was some danger of asphyxiation just because of the way she was lying in her own blood," he continued. "So I wanted to make sure that at first we could get her in a position so that she could breathe properly."

Hernandez cradled Giffords in his lap. "Once she was propped up against my chest and she could breathe properly, [I began] applying pressure to the wound to make sure that we could stem the blood loss."

Hernandez told Hill that at that point, everything else happening around them became a blur. "Once I saw the condition that the congresswoman was in, I kind of started tuning everything else out, and my singular focus became tending to her," he said.

"Once the emergency services came in, I kind of let them take over for the medical side, because that's their job and that's their expertise. But then I knew that my job was to make sure we were taking care of her emotional well-being. So I started trying to let her know I was still there, making sure she knew someone was with her and she wasn't alone."

Hernandez said Giffords was alert and responsive the entire time, although her eyes were closed.

"The way that she was communicating was through hand squeezes. So I would ask her a question and she would answer by squeezing my hand," he said. "The squeezes let us know that she was still conscious."

"A lot of people said your quick thinking - propping her up, everything you did - may have helped save her life," said Hill. "Many people are calling you a hero and have been for the last couple of days. How does that feel?"

"I think it's a little strange to be calling me a hero," Hernandez replied, "because the things that I did was a one-off. However, the real heroes are people like Congresswoman Giffords, who have dedicated their lives to public service and helping others."

Hernandez said he had spoken briefly to Giffords' husband and sister, "just to let them know what had happened on the day of the shooting. But I'm giving them some space, as I think everyone should be."

Although he had been interning for just five days, Hernandez has known Giffords for several years: "I originally interned for her congressional campaign in 2008, and I did some work with her campaign in 2010. But I had the great pleasure of being accepted as an intern in December, and I started this week."