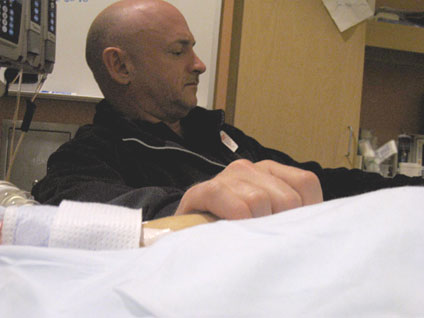 In his first interview since Saturday's shooting in Tucson, Arizona, Mark Kelly, the husband of Arizona Rep. Gabrielle Giffords, opened up on Thursday about his wife's recent medical progress. He said Giffords' breathing tube could be removed as early as Friday.

"I do think about her neurological function, and it is just too early to tell what that will be," Kelly told CNN.

Giffords was shot in the head in the Tucson, Arizona shootings that killed 6 and injured 14. She remains in critical condition, though doctors have expressed optimism about her progress.

Kelly said he thought his wife had been cognizant of President Obama's presence during his recent visit to her hospital room.

"I think she did know, though I think she was trying to figure out what he was doing there," he said.

Kelly, a NASA astronaut, was in Houston when he heard the news that Giffords had been shot. He told CNN that he immediately flew in a friend's plane to the hospital where Giffords was being treated to avoid possible delays in a commercial flight.

Dr. Randall Friese, a trauma surgeon at the hospital, spoke about Giffords' first moments at the University Medical Center.

"My first response was I grabbed her hand, leaned into her and said 'Ms. Giffords, you're in the hospital, we're going to care for you, please squeeze my hand,' and she did," he told CNN. "I got the impression that she was trying to communicate but was frustrated by the fact that she couldn't communicate."