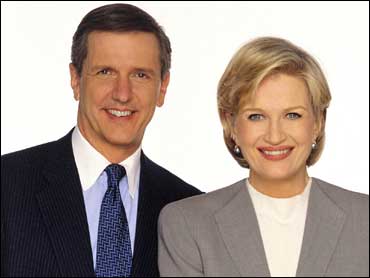 ABC will announce Wednesday that Charles Gibson and Diane Sawyer, two of its best-known journalists, will fill in on "World News Tonight" for anchorman Bob Woodruff as he recovers from injuries suffered in a roadside bombing.

ABC News President David Westin will tell his news division of the plan later in the day, said an executive there who spoke on condition of anonymity.

Gibson and Sawyer will take turns as partners to Elizabeth Vargas, who became co-anchor of the evening newscast with Woodruff last month. There was no immediate word on how that would affect their roles as anchors on "Good Morning America."

Westin is committed to his revamped version of "World News Tonight," which includes an afternoon Webcast, live feeds to the West Coast and frequent reporting visits to world hotspots by the anchors.

Woodruff was on one of those trips to Iraq when he was seriously injured Sunday.

The 44-year-old journalist was slowly being brought out of sedation Wednesday at a Navy hospital in Maryland where he was flown for treatment the night before. Military doctors and Woodruff's brother David said his condition was improving by the day.

"He moved his legs and his arms again when they got him into the Bethesda hospital. He attempted to open his eyes, and that can't be anything but good," David Woodruff said on "Good Morning America."

He said his brother was coming out of "a really bad place" but showing signs of recovery.

Woodruff and cameraman Doug Vogt were filming a report on the Iraqi military and standing in the hatch of an Iraqi military vehicle when the bomb exploded Sunday. They were treated in Iraq, then taken to a U.S. military base in Germany and finally airlifted Tuesday to the United States along with 15 other patients aboard a C-17 military plane.

Lt. Col. Guillermo Tellez, chief of surgery at the Landstuhl Regional Medical Center in Germany where the men were treated, said that while Woodruff faced a long rehabilitation, doctors were hopeful he could return to his job.

ABC reported Wednesday that Woodruff was slowly being brought out of sedation at the National Naval Medical Center in Bethesda, and that Vogt, 46, was talking. The network said that the military recommended taking the men to the Navy hospital and that ABC was paying for their care.

Doctors at the Bethesda hospital have access to specialized equipment that can treat penetrating head wounds, hospital spokeswoman Ellen Maurer said. Either the Naval Medical Center or Walter Reed Army Medical Center is typically the first American stop for soldiers, sailors and Marines wounded in Iraq.

Westin said he was optimistic about Woodruff's and Vogt's recovery.

"We are very encouraged overall for the both of them," he said. "The signs Bob is showing are as good as they can expect from this type of injury. He's doing better than all of us expected."

Gibson, 63, had been considered a potential replacement for the late Peter Jennings on "World News Tonight," but he and Westin couldn't agree last fall on how long he would be doing the job. The news division president considered Woodruff and Vargas, both in their 40s, a longer-term solution.