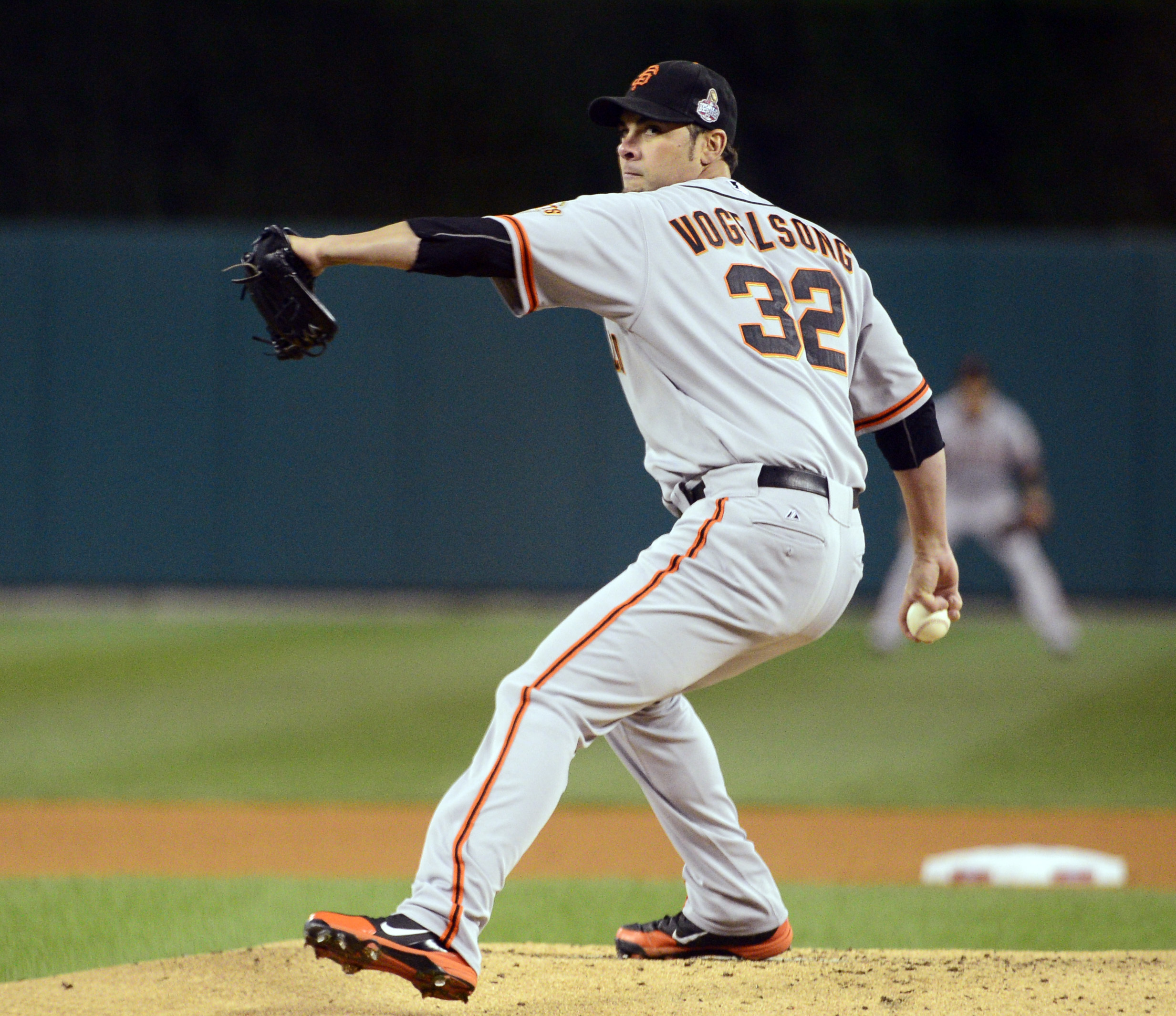 One win from their second title in three seasons, the Giants became the first team to pitch consecutive shutouts in the Series since Baltimore's staff ended 1966 with three straight against the Los Angeles Dodgers.

Vogelsong became only the third pitcher to make four straight starts in a single postseason in which he allowed no more than one run, giving up five hits in 5 2-3 innings with four walks and three strikeouts. He induced double-play grounders to escape trouble in the first and third innings, then got Triple Crown winner Miguel Cabrera to pop out with the bases loaded and two outs in the sixth.

Matt Cain, coming off a Game 7 win over St. Louis in the NL championship series, starts for San Francisco in Game 4 on Sunday night. Max Scherzer starts for Detroit, his first appearance since completing the Tigers' ALCS sweep of the Yankees.

Blanco hit a run-scoring triple off the wall in right-center field in the second inning against Anibal Sanchez and scored on Brandon Crawford's single.

Pedro Sandoval, who tied the Series record with three home runs in the opener, had two more hits and is hitting .636 (7 for 11).

Blanked in consecutive games for the first time since April 2008, Detroit was 0 for 4 with runners in scoring position on the night and is 1 for 11 in the Series. The Tigers have lost six straight Series games dating to 2006, and no team has ever rebounded from an 0-3 Series deficit to win the title.

Held scoreless for 18 straight innings, the Tigers have gotten little production from the middle of their order. Cabrera, the first Triple Crown winner in 45 years, is 2 for 9 with one RBI and Prince Fielder, signed to a $214 million contract in January, is 1 for 10 with no RBIs. Fanned booed when he struck out against Tim Lincecum in the eighth.

While Detroit never trailed during its AL championship series sweep of the New York Yankees, the Tigers have not led in the World Series.

Vogelsong, 3-0 with 1.09 ERA in four postseason starts, has traveled through 10 minor league cities plus two in Japan over the last 15 years, also making winter ball stops at the Arizona Fall League and Venezuela. In between, the 35-year-old has gone 37-38 during parts of eight seasons with the Giants and Pittsburgh. He has gone seven straight starts allowing one run or none, dating to mid-September.

Sanchez, acquired from Miami in July, showed rust from his 12-day layoff. Hunter Pence walked on four pitches starting the second, ending Sanchez's streak of 95 right-handed batters without a walk since Aug. 22, according to STATS LLC. One out later, Blanco pulled a full-count pitch off an advertising board on the fence.

Detroit pulled the infield in — manager Jim Leyland was criticized by some for leaving his middle infielders back with Game 2 scoreless in the seventh — and Hector Sanchez struck out. Crawford, the No. 9 hitter, lofted a single to short center that Austin Jackson overran for an error.

With the crowd of 42,262 quieted and the Tigers' infielders looking dismayed, Sanchez retired Angel Pagan on an inning-ending grounder to first.

Sanchez allowed six hits in seven innings, struck out eight and walked one.

San Francisco improved to 9-1 in the postseason when scoring first.

Detroit, which lost for the first time in five postseason games this year, had plenty of chances.

Quintin Berry walked with one out in the first and Cabrera, presented with a dark blue and gold crown by Major League Baseball before the game, singled to left. But Fielder bounced into a 4-6-3 double play, dropping to 0 for 5 with runners on in the series and 1 for 19 versus righties in the postseason.

Omar Infante hit a broken-bat single with one out in the third and Jackson reached on an infield hit, beating Sandoval's throw on a four-hopper to third. Berry hit into a 4-6-3 double play on the next pitch.

Alex Avila and Infante singled with one out in the fifth and Jackson's walk loaded the bases, causing pitching coach Dave Righetti to make a trip to the mound and the crowd to start to wave white rally towels.

Berry, who had played just four games above Double-A before this year, swung over a 91 mph pitch and, with Lincecum and Jose Mijares warming up in the bullpen, Cabrera popped to shortstop.

After Vogelsong walked Andy Dirks with two outs in the sixth, Lincecum relieved for the second time in the Series and retired Jhonny Peralta on a flyout.

With the shift to the AL ballpark, Giants manager Bruce Bochy inserted Hector Sanchez as his designated hitter in the No, 8 slot and dropped Crawford to ninth.

Alternating catchers, the Tigers went with Game 1 starter Avila in place of Gerald Laird and made two switches in the outfield. Berry started in left, with Delmon Young moving to DH, and Dirks replaced Avisail Garcia in right.

The gametime temperature of 47 was a 17-degree drop from Game 2, and the ivy on the center fielder batter's background has started to turn autumn red and brown. The Tigers' starters wore long sleeves and the Giants' regulars a mixture of long and three-quarters, with only Vogelsong in short sleeves. Four of the six umpires wore gloves, with plate umpire Fieldin Culbreth and Brian O'Nora at first going with bare hands.

NOTES: Vogelsong joined Blue Moon Odom in 1972 and Burt Hooton in 1981 in making four straight starts in a postseason allowing one run or none. ... Cabrera has reached safely in his first 23 postseason games, two shy of Boog Powell's record, according to STATS LLC. ... Zooey Deschanel, who sang "The Star-Spangled Banner" before Game 4 last year, became only the second person in a decade to perform the national anthem before Series games in consecutive years. John Legend sang it before Game 2 in 2009 and the 2010 opener.