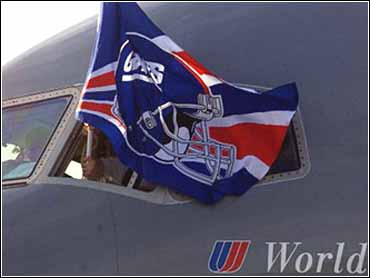 Armed with confidence and camcorders but no new guarantees, the New York Giants arrived on Sunday to begin preparations for a Super Bowl showdown with the Baltimore Ravens.

Only a few dozen fans were at Tampa International Airport and a nearby hotel to greet the NFC champions after the Giants' chartered jet landed around 4:35 p.m.

"That's the way to do it, sneak in and sneak out," said 16-year veteran offensive lineman Lomas Brown, who will be playing in his first Super Bowl. "If we win, let me change that to when we win, they will be waiting in full force for us."

About an hour after arriving, Giants coach Jim Fassel met with the team to go over itineraries and ground rules, such as curfews and what night spots should be avoided.

"If you don't have your team focused in now and they don't believe what you are saying and that everything is in place, you better not show up here," Fassel said.

The Ravens are scheduled to arrive Monday.

The flight that brought the Giants was very low key. Players watched a movie and walked around the cabin with video camcorders. Defensive tackle Keith Hamilton slept.

As the plane touched down, linebacker Jessie Armstead hit the back of defensive end Michael Strahan's seat and said "Do you believe we're at the Super Bowl?," a reminder of how far the Giants have come.

Just two months ago, people were writing off the Giants after consecutive losses to St. Louis and Detroit dropped their record to 7-4. They are now 14-4.

"I think everybody is excited," Strahan said. "I think we had more video cameras in the locker room and on the plane than we have here filming us now.

"Guys want to remember this because this is going to be a memory that lasts a lifetime," he added. "It may be the only time we get to do this, so guys are trying to take advantage. The only way to end this right is to win."

While Brown said the Giants were going to win, no one on the team was willing to issue a guarantee like Fassel did on Nov. 22, when he said the Giants would make the playoffs for the first time since 1997.

"We're confident in our ability to go out and execute the game plan and get the job done," Hamilton said. "I'm not assuring you of a win or guaranteeing you of a win. I'm not doing that. We're going to come out and we'll be ready to play."

Fassel stressed to his players that they were not here to party. Almost 85 percent of the Giants game plan is already in place.

There is no doubt the Giants are peaking. They posted their most impressive win in years, beating the Minnesota Vikings 41-0 in the NFC title game.

The Ravens set an NFL record for fewest points allowed in a 16-game season, limiting opponents to 165. They have allowed only 16 in three playoff games.

"No situation is out of hand, we don't panic," Strahan said. "Even when someone is moving the ball on us, we're relaxed in the huddle because we realize every play we can make something happen. We don't feel like anybody can score on us. That's the kind of confidence you have to have."