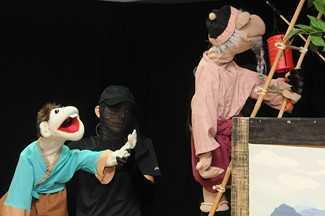 (CBS/KGMB/AP) HONOLULU - A van belonging to a Maui performing arts organization was broken into Saturday night and the thieves made off with three giant puppets worth $10,000, cutting the company's cast in half in the middle of a popular tour.

Maui Academy of Performing Arts officials said the cloth-covered foam puppets were created in 2009 by puppeteer Frank Kane, who once worked for Jim Henson and the Muppets, and stolen Saturday night in Kahului. The group made a plea for the public's help in locating the missing puppets as workers searched roads and trash bins for any sign of them.

"They're really not of any value to whoever took them, but they're of great value to us," executive and artistic director David Johnston said Monday. "We scoured the area looking for them."

The theft occurred as the company prepared to fly to Oahu to perform "The Further Adventures of Tikki Tikki Tembo" for elementary and preschool children, an adaptation of a popular Chinese folk tale that is seen by 45,000 kids a year across Hawaii.

Johnston said losing three out of six puppets puts a financial strain on the nonprofit's ability to put on shows because they are used so frequently.

"We are operating hand-to-mouth right now, and these thieves just cut off one of our hands," Johnston told CBS affiliate KGMB.