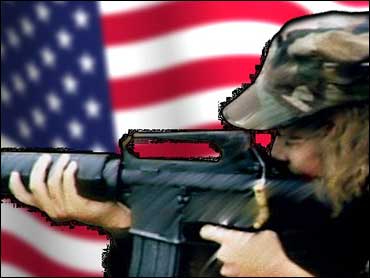 This column from The New Republice was written by Michelle Cottle.


I told you so. There. I've said it. I've been trying to avoid those words for weeks, as the situation in Iraq has gone from grim to grimmer to straight down the toilet. But, as someone who (unlike "The New Republic") opposed George W. Bush's desert odyssey long before Baghdad was shocked and awed, I see red every time I hear of yet another colossal screw-up in this administration's postwar "strategy." Still, angry as I am about Iraq, I nonetheless feel a pang of sympathy for all those Bush fans who increasingly find themselves laboring to defend the indefensible (e.g., the continued employment of George "Slam Dunk" Tenet or Donald "Don't Show Me the Torture Pics" Rumsfeld). Whatever outrage-related stress I'm suffering, it's clearly negligible compared with the complete mental meltdown occurring on the right, particularly in regards to the torture of Iraqi internees at Abu Ghraib.

As photos (and maybe even video!) trickle out documenting the misdeeds of American soldiers, conservatives are scrambling to find an acceptable party to blame. A few, like George Will, have risen brilliantly to the occasion, offering the administration a tough-love critique. But most have treated the two most logical candidates -- the Pentagon and the White House -- as off-limits. For them, the current unpleasantness must be somehow pinned on a reassuringly liberal villain. You can actually hear the gears whirring in their heads as they cycle through the usual suspects: Bill, Hillary, unions, tree-huggers, taxes, the French -- surely some left-wing bogeyman can be found to take the heat off poor Rummy!

Fortunately, a trio of right-wing chicks -- Linda Chavez, Peggy Noonan, and the perennially unbalanced Ann Coulter -- have leaped into this breach, peddling the ideologically soothing notion that Abu Ghraib is the sad, but predictable, by-product of permitting women in the military. (Ah, feminism! The perfect fall gal!) Coulter, true to form, doesn't bother with logic. In her recent sit-down on "Hannity and Colmes," the blonde bomb-lobber simply asserted that women should not be allowed in the military because, "in addition to not being able to carry even a medium-sized backpack, women are too vicious." In Coulter's case, this may be true. (This is, after all, the gal whose prescription for fighting Islamist terrorism is to "invade their countries, kill their leaders, and convert them to Christianity.") But, such exceptions notwithstanding, we have several thousand years of evidence suggesting men are more than capable of perpetrating major-league atrocities without any help from the fairer sex. Besides, aren't conservatives the ones always yammering on about how, in their zeal to feminize the military, liberals risk making it soft and weak and too prissy to wage war? Be crazy if you want to, Ann. But at least be consistent.

Noonan doesn't blame a gender-blended military for the problems at Abu Ghraib; she blames feminism for producing the type of woman capable of committing such crimes. The women's auxiliary corps of yore would never have been so "cruel," so "coarse," so "vulgar," sniffs Noonan. "They apparently did not think they had to prove they were men, or men at their worst." Noonan, it seems, doesn't have a problem with military women per se. She just wants them confined to supportive, nurturing, appropriately ladylike roles in keeping with their traditional calling as civilizers of men.

Chavez offers the most involved -- and incoherent -- argument against babes in uniform. Her catchall thesis is that "the new sex-integrated military interferes with unit cohesion and results in less discipline" by encouraging the kind of rampant sex (and pregnancy!) that plagues today's armed forces. But it's not clear how you get from the "sexual tension" Chavez says this creates to torture. In fact, while the absence of G.I. Janes might mean less sex (and certainly fewer pregnancies) among the troops, it's not obvious how this translates into less "sexual tension." It would, however, most likely encourage a variety of alternative "tension relievers" of the sort that normally keep conservatives up at night: promiscuous sex with local women (which would really help America's image among Iraqis), increased patronage of prostitutes, and, of course, the kind of male troop-on-troop action that dare not speak its name. If anything, you'd think the absence of women in the military would make lonely, sexually frustrated male troops more likely to abuse detainees, not less.

Perhaps recognizing that her dissertation on sex has nothing to do with the controversy at hand, Chavez asks, "So what does this have to do with those pictures of mistreated prisoners?" Her answer: "Take a look at the faces of those soldiers again, especially the female soldiers. ... They look like they're showing off at some wild party, trying to impress everybody with how 'cool' they are." Chavez is apparently suggesting that the naughty boys and girls at Abu Ghraib saw torture as some sort of kinky mating ritual -- that abusing Iraqis was all about catching the eye of that hot MP in the next barrack. Had they been blissfully free from "sexual tension," the young male G.I.s at Abu Ghraib would have been far less likely to sodomize prisoners with chemical light sticks -- since young men left to their own devices never act like deranged, testosterone-fueled delinquents.

Behind all the novel theories is this basic truth: The Bush administration never makes a mistake. Sure, American personnel in Iraq have been stretched dangerously thin thanks to a certain defense secretary's reluctance to call up more troops. It's also true that terrified, inexperienced reservists received virtually no training in preparation for sensitive postings. And military intelligence probably did "request" that internees be softened up a bit to aid interrogations. But all of this was part of a brilliant plan that would surely have succeeded if not for some misguided lefty notion about gender equality. Which is why the most important task the Pentagon faces these next few months isn't upping our troop count, or investing the international community in Iraq's future, or even ferreting out who ordered the abuse of Iraqi prisoners. It's drumming every coarse, vulgar, uppity, sexually corrupting woman out of the military. And, if that doesn't work, we can always blame the gays.

Michelle Cottle is a senior editor at The New Republic.