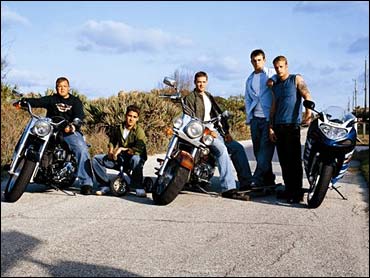 Thrust unexpectedly into the role of prison guards for Saddam Hussein, a group of young American soldiers found the deposed Iraqi leader to be a friendly, talkative "clean freak" who loved Raisin Bran for breakfast, did his own laundry and insisted he was still president of Iraq, says a report published on Monday.

"The first time I met him, it was very intimidating. A tall man, very slender. You could see his eyes through the slat. I didn't know what to say. It was like, first thing came to mind, 'It is nice to meet you.' My inner monologue came to mind, it wasn't nice to meet him. He's a dictator," guard Paco Reese told CBS Early Show anchor Harry Smith.

GQ magazine's July issue says Saddam greatly admired President Reagan and thought President Clinton was "OK," but had harsh words for both President Bushes, each of whom went to war against him.

"The Bush father, son, no good," one of the soldiers, Cpl. Jonathan "Paco" Reese, 22, of Millville, Pa., quotes Saddam as saying. But his fellow GI, Specialist Sean O'Shea, then 19, says Saddam later softened that view.

"Towards the end he was saying that he doesn't hold any hard feelings and he just wanted to talk to Bush, to make friends with him," O'Shea, of Minooka, Pa., told the magazine.

A third soldier, Spc. Jesse Dawson, quoted Saddam as saying of President Bush, "'He knows I have nothing, no mass weapons. He knows he'll never find them.'"

The three GIs were among members of C Company, 2nd Battalion, 103rd Armor Regiment, a Pennsylvania National Guard unit from the Scranton area that was activated for duty in Iraq in late 2003. Instead of combat, they were chosen by the FBI to serve as guards at a U.S. military compound where Saddam was an "HVD," or high value detainee.

The nine-month assignment was so secret that they could not tell their families, according to the article by GQ correspondent Lisa DePaulo. The article names five of the soldiers who agreed to discuss the experience, with the military's permission.

They were required to sign statements prohibiting them from revealing the location, dates, garrison strength and certain other details of Saddam's incarceration. But they were free to describe their interactions with the prisoner, according to the article.

Pentagon officials had no immediate comment because they had not seen the article, spokeswoman Lynnette Ebberts said Monday.

The soldiers' descriptions of Saddam's life in prison match the recent photos of him that apparently were smuggled out of prison — showing the former dictator in his underwear and a long robe. They describe a man who once lived in palaces and now occupies a cell where he has no personal privacy.

Once, when Saddam fell down during his twice-a-week shower, the article says, "panic ensued. No one wanted him to be hurt while being guarded by Americans." One GI had to help Saddam back to his cell, another carried his underwear, it adds.

Saddam learned the names of the GIs guarding him, was interested in the details of their lives, which they were not supposed to discuss, and sometimes offered fatherly advice. They conversed in English.

O'Shea said when he told him he was not married, Saddam "started telling me what to do." "He was like, 'you gotta find a good woman. Not too smart, not too dumb. Not too old, not too young. One that can cook and clean.'"

Then he smiled, made what O'Shea interpreted as a "spanking" gesture, laughed and went back to washing his clothes in the sink.

"This is the opposite of Abu Ghraib," said GQ editor Andy Ward. "These young men showed Hussein a respect and courtesy that made possible an unusual bond between captors and captive. And because of this, they were able to see a very different side of one of the most controversial figures in modern history."

The soldiers say Saddam was preoccupied with cleanliness, washing up after shaking hands and using diaper wipes to clean his meal trays, his utensils and the table before eating. "He had germophobia or whatever you call it," said Dawson, 25, of Berwick, Pa.

The article quotes the GIs on Saddam's eating preferences — Raisin Bran Crunch was his breakfast favorite. "No Froot Loops," he told O'Shea. He ate fish and chicken but refused beef at dinner.

For a time his favorite food was Cheetos, and when those ran out, Saddam would "get grumpy," the story says. One day the guards substituted Doritos corn chips, and Saddam forgot about Cheetos. "He'd eat a family-size bag of Doritos in 10 minutes," Dawson says.

Saddam thinks CBS News Correspondent Dan Ratheris "a good guy," the soldiers said, and denies he ever had an association with Osama bin Laden.

Saddam prayed five times a day in his cell and kept a Quran that he claimed to have found in some rubble near the underground hideout. "He proudly showed (it) to the boys because it was burned around the edges and had a bullet hole in it," the story says.

According to the author, Saddam told his guards that when the Americans invaded Iraq in March 2003, he "tried to flee in a taxicab as the tanks were rolling in," and the U.S. planes attacked the palace to which he intended to escape rather than the one he was in, injuring some of his bodyguards.

"But then he started laughing," recalls Reese. "He goes, 'America, they dumb. They bomb wrong palace.'"

Saddam told the guards his capture in an underground hideout on Dec. 18, 2003, resulted from a betrayal by the only man who knew where he was, and had been paid to keep the secret.

"He was really mad about that," says Dawson. "He compared himself to Jesus, how Judas told on Jesus. He was like, 'That's how it was for me.' If his Judas never said anything, nobody ever would have found him, he said."

U.S. officials said at the time that Saddam's capture resulted from intelligence from several sources rather than a single informant.

The article says that if Saddam knew the statue of himself in Baghdad's Firdos Square was toppled on April 9, 2003, he never mentioned it to the GI guards. He insisted that everything he did, including the 1990 invasion of Kuwait, was for the good of his people, and invited his guards to return to Iraq and stay at his palace after he was restored to power.

"He'd always tell us he was still the president. That's what he thinks, One hundred percent," says Dawson.