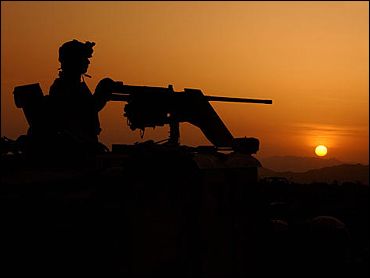 The patrol came under fire Monday afternoon near Orgun, a town in Paktika province where U.S. troops man a base close to the Pakistani border, spokesman Maj. Mark McCann said.

The two injured soldiers were rushed to another base in neighboring Khost province, where they were in stable condition, McCann said.

In the southern part of the country, Afghan army and police fought a separate gunbattle on Monday, leaving several casualties and prompting U.S. forces to step in to restore order, police and witnesses said.

The 90-minute battle started after Afghan National Army troops disarmed police at a checkpoint and a bazaar in Qalat, the capital of Zabul province, said deputy police chief, Jailani Khan.

He claimed the army had no authority to disarm the police. The fighting subsided after U.S. forces arrived and took over security. He said there were some casualties, but he didn't know how many.

A shopkeeper who was reached by telephone from Kandahar said on condition of anonymity that he saw at least three dead bodies.

American helicopters were still circling above the city.

U.S. military spokesman confirmed there had been an incident in Qalat, but gave no details. Afghan army officials were not immediately available to comment.

Zabul is one of the most insecure provinces in the lawless reaches of southern and eastern Afghanistan, and has also been scene of heavy fighting in the past year between coalition forces and Taliban rebels.

The United States is helping to train the new national army which is meant to gradually replace militia security forces usually loyal to local commanders.

Afghan army soldiers also opened fire on some provincial militiamen in the area of the Durai bazaar in Kandahar city on Monday morning, killing two of them and injuring one, said Khalid Pashtun, spokesman for the Kandahar governor.

He said the circumstances of that clash weren't yet clear and an investigation was underway.

It wasn't clear what caused the blast. No U.S. personnel were reported hurt.

Before the fall of the Taliban regime in late 2001, the compound was used by the hardline regime's leader, Mullah Omar.