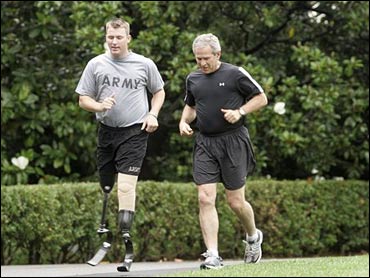 President Bush took a jog Tuesday with a soldier who lost part of both legs in Iraq, following through on a bedside promise even the president had doubts about at the time.

Despite a slight drizzle, President Bush and Staff Sgt. Christian Bagge took a slow jog around a spongy track that circles the White House's South Lawn. About halfway through their approximately half-mile run, Bush and Bagge paused briefly for reporters.

The president met the soldier on a New Year's Day visit to Brooke Army Medical Center in San Antonio, where Bagge had been recuperating from his injuries for months. Bagge, 23, and a native of Eugene, Ore., was in a convoy hit by roadside bombs a year ago in the remote Iraq desert south of Kirkuk.

He told President Bush in January that he wanted to run with him. Mr. Bush has been an avid runner, but in the past few years, due to knee problems, he has switched mainly to mountain biking.

But, the president added, in tribute to the hard work Bagge did to realize this goal, "There was no doubt in his mind that he would."

"It's a privilege," commented Bagge, who had changed in the Oval Office into a special set of prosthetic legs that he uses to jog.

And then the pair took off for the remainder of their run.