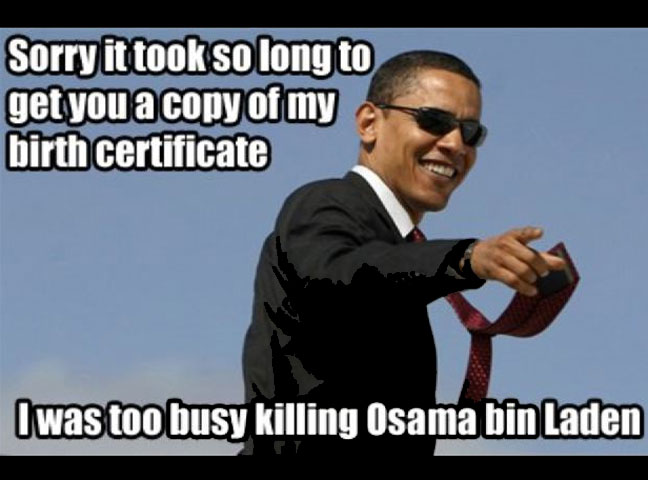 (CBS/What's Trending) With news of Osama bin Laden's death infiltrating the interwebs, a plethora of memes about the historical event are going viral or well on the verge of global web dominance. From patriotic to emotional to comedic, photos, videos and tweets are shaping the way communities across the Internet are digesting this historical event.

Need to know what Osama's ghost is Tweeting? Why exactly did it take so long for Obama to give you his birth certificate? Here's the memes that answer those hard hitting questions.

Less than an hour after the terrorist's death was confirmed, the Internet welcomed the late Osama bin Laden's Twitter likeness into the World. Last night at 11:00PM EST, @GhostOsama tweeted, "Well this sucks...I accidentally enabled location on my tweets," and has continued to tweet consistently. He currently has more than 37,000 followers. Joining the terrorist's ghost is @Osamainhell, currently tweeting to 8,500 followers. However it's @Jesus, who spreads his word to nearly 316,000 little blue birds, who had the most popular response online to bin Laden's death. Apparently, he couldn't resist taking a stab at the infamous terrorist. His tweet tops the list of the most popular Osama-related retweets. Here's the 140 characters or less that seemed to resonate the most with people. Why did it take so long to find Osama bin Laden? One meme suggests that it's because he's hiding in plain sight, just like Waldo. What's Trending partner Buzzfeed posted a collection of the best "Where in the World is Osama bin Laden?" images.

One web user connected the controversy over why it took President Obama so long to release his birth certificate to Osama's death. This photograph surfaced shortly after the bin Laden news broke on Twitter.

This morning, The Washington Post asked its Twitter followers, "#Wherewereyou when you heard the news of Osama bin Laden's death, and how did you hear it?" A surge of tweeters are now sharing what they were doing. Most people are tweeting that theywere perusing their social networks.

What would a roundup of memes be without an animated video? The death of bin Laden is celebrated in this Taiwanese cartoon, created NMAWorldEdition, the same company that brought you Steve Job's ninja incident and Brett Farve's sexual harassment case. Finally, want to find Osama bin Laden's place on Google Maps? Look up "Osama bin Laden compound, Abbottabad, Pakistan." Here's some of the reviews that pop up.