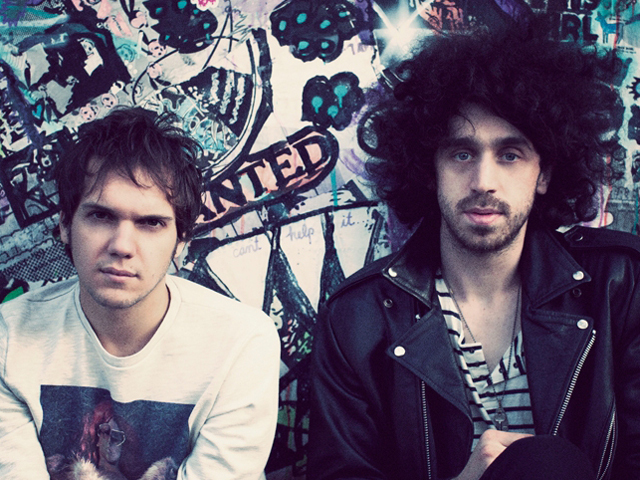 (CBS News) What do you get when you put together samples, rhythms and catchy songwriting?

The pop-driven cocktail makes up Ghost Beach, a New York-based duo, which calls itself "tropical grit-pop."

The "tropical thing" happened by accident, Eric "Doc" Mendelsoh (guitars, synths) told CBSNews.com before a recent show at Piano's in New York. He says they coined the term after someone said one of their songs "sounded like summer."

Summer happens to be an incidental thread that runs through Ghost Beach and its music.

There's Josh Ocean, one-half of Ghost Beach, who grew up on the shore of Long Island. But it wasn't until Ocean and Mendelsoh played one of their "summery" tracks for their producer last year that a group name formed.

"We played it for his 6-year-old daughter, and she said, 'Oh you should call it Ghost Beach.' Which we found out was a 'Goosebumps' book and that's probably where she got it," Ocean (vocals, bass, synths) said. "But that's what she came up with, and we were like 'yes.'"

Once Ocean and Mendelsoh, who previously played together in another band, settled on a name, it was time to get down to business. Writing and recording soon followed over the past year, and ever since, the New York-based duo has been self-releasing music for free online, along with accompanying music videos.

Something about the musical partnership works, the guys say. They have completely different approaches to music, but it "feels right," Ocean said.

Mendelsoh is the self-described "techy, nerdy music guy," while Ocean "has the lofty ideas."

"Ghost Beach is usually the middle ground where my head is at where Eric's head is, which is usually in completely different places," Ocean said.

Right now, the group is compiling tracks for its debut full-length release.

In between recording sessions, Ghost Beach has been road testing its songs live. The duo's live show features vocals, guitar and drums, along with samples and loops. Their performances lie somewhere between a DJ and a band.

"Because we've been around for only a short period of time, our most important things is just writing, making new music," Ocean said.