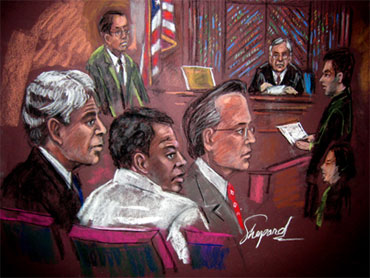 The verdict in the case of Ahmed Ghailani, the first Guantanamo detainee to be tried in civilian court, has cracked open the debate over how to bring to justice detainees in the "war on terror."

How the debate unfolds will have considerable consequences for the trials of other detainees, including self-professed Sept. 11 mastermind Khalid Sheik Mohammed. It also renews scrutiny on how alleged terrorists are treated while in detainment and puts a fresh spotlight on what steps the government would take if an alleged terrorist were acquitted of all charges.

Ghailani was convicted of one conspiracy charge but acquitted of more than 280 other charges related to his role in the 1998 bombings of U.S. embassies in Africa.

Critics of the Obama administration's plans to try more Guantanamo detainees in federal court are pointing to the results of the trial to argue the administration is engaged in a dangerous experiment that risks letting alleged terrorists free.

Others are saying the verdict, given the variables in the case, proves the strength of the justice system.

Some human rights advocates, meanwhile, say that Ghailani's acquittal on most of the charges reveals that the U.S. poorly handled the case not by trying Ghailani in federal court, but by using torture to collect evidence -- evidence that would later be thrown out.

Ghailani faces 20 years to life in prison; the Justice Department released a statement last night saying it is "pleased" with the verdict.

Republican leaders in Congress, however, said the results of the trial should serve as a grave warning for the administration to change course.

Rep. Peter King (R-N.Y.), top Republican on the Homeland Security Committee, pointedly reminded the administration that Attorney General Eric Holder had said "failure is not an option" in such cases.

"This is a tragic wake-up call to the Obama administration to immediately abandon its ill-advised plan to try Guantanamo terrorists like the admitted 9/11 mastermind Khalid Sheik Mohammed in federal civilian courts," King said in a statement. "We must treat them as wartime enemies and try them in military commissions at Guantanamo."

King said that as chairman of the Homeland Security Committee next year, he intends to hold hearings on this issue.

Rep. Pete Hoekstra (R-Mich.) the top Republican on the House Intelligence Committee, also warned that because of this verict, "Gitmo cases from here-on-out will only get more difficult."

The Ghailani trial proved that federal trials for detainees are a "mistake," he said. "This case was supposed to be the easy one, and the Obama administration failed."

Liz Cheney, chairman of the board of directors of the group Keep America Safe, said in a statement that President Obama "rolled the dice in a time of war" with Ghailani's trial, and the results are "embarrassing" and "dangerous."

"We urge the president: End this reckless experiment," Cheney said. "Reverse course. Use the military commissions at Guantanamo that Congress has authorized. And, above all--accept the fact that we are at war."

Peter Quijano, Ghailani's lead defense attorney, insisted Ghailani was an unwitting pawn in the 1998 terrorist plot and said his client was innocent. He said the judicial system worked as it should.

"This verdict is a reaffirmation that this nation's judicial system is the greatest ever devised. It is truly a system of laws, not men," he said.

Quijano acknowledged that the verdict may have come down differently had the judge allowed the testimony of what was supposed to be the prosecution's key witness -- a Tanzanian miner who said in a pretrial hearing he sold Ghailani TNT. However, the judge refused to allow testimony from that witness because investigators learned of his existence from Ghailani after using "enhanced interrogation" techniques on him.

Congressman King said in his statement the case "was doomed from the beginning" because of the judge's decision. It should be noted that King (and some other critics) declined to point out that the use of evidence obtained through torture is also prohibited in military tribunals.

Amy Davidson, senior editor at The New Yorker, drove that point home in a column yesterday.

"Let's be clear: if time in the extra-judicial limbo of black sites, and the torture that caused some evidence to be excluded, makes prosecutors' jobs harder, the problem is with the black sites and the torture, and not with the civilian trials that might eventually not work out quite the way everyone likes," she wrote.

Tom Malinowski, Washington director for Human Rights Watch, similarly said, "The original sin here is torture," the Washington Post reports. "It would have haunted a military trial, too, with likely the same result. The only difference is that in this courtroom, Ghailani was convicted with legitimacy and finality."

"I hope the conclusion people draw from this is that this is the way to get swift and sure justice," he said.

"This case should put to rest any unfounded fears that our federal justice system cannot conduct fair, safe and effective trials in terrorism cases," Shamsi said. "The jury heard the evidence and delivered a verdict that - unlike military commissions trials - we can trust. We should be proud of a system that isn't set up to simply rubberstamp the government's case no matter how little reliable evidence there may be."