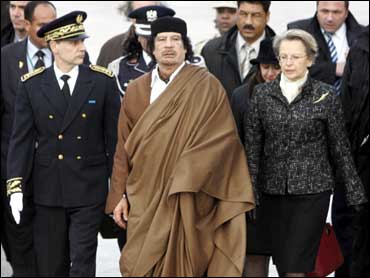 Libyan leader Moammar Gadhafi received encouraging words from France - and cut deals for $14.7 billion in contracts for armaments and a nuclear reactor - on his first official visit Monday to a Western country after renouncing terrorism and doing away with weapons of mass destruction.

"We must encourage those who renounce terrorism, who renounce the possession of nuclear arms," Sarkozy said after a meeting with Gadhafi.

He did not elaborate on the accords for a civilian nuclear reactor for a desalination plant and armaments. A signing ceremony was scheduled for Monday evening.

Libya also agreed to buy 21 Airbus planes - 10 A350s, four A330s and seven A320s - but the value of the deal was not immediately given. One of Gadhafi's sons told French daily Le Figaro that the Airbus deal was worth $4.4 billion.

Gadhafi was long known as the champion of armed struggle and a sponsor of state terrorism.

But his country started moving back into the international fold with its 2003 decision to dismantle its clandestine nuclear arms program. The same year it paid $2.7 billion to families of the victims of the 1998 Pan Am bombing over Lockerbie, Scotland, then agreed to pay $170 million in compensation to the families of the 170 victims of the 1989 bombing of a French UTA passenger jet.

Sarkozy is the first Western leader to extend an invitation to the flamboyant "guide of the Libyan revolution" since his falling out with the West in the 1980s.

"France must speak with all of those who want to return to the road of respectability and reintegrate the international community," Sarkozy said.

Gadhafi's visit brought protests and complaints, including from Sarkozy's own minister for human rights.

Gadhafi was castigated by French politicians, philosophers and others before his plane landed on Monday - International Human Rights Day. Police detained a group of nearly 30 protesters at Paris' human rights plaza, according to AP Television News. Up to 80 were arrested around Paris, both foes and partisans of Gadhafi, the Web site of the daily Le Figaro reported.

"It would be indecent, in any case, that this visit be summed up with the signing of contracts," she said in an interview published Monday in the daily Le Parisien. For France to avoid "the kiss of death," it must ensure respect for human rights in Libya, she said. "Col. Gadhafi must understand that our country is not a doormat."

Sarkozy said later that he had stressed to Gadhafi the need "to progress on the road to human rights." As for Yade, the president said that as human rights minister her convictions were "perfectly normal" and he shared them.

Yade's boss, Foreign Minister Bernard Kouchner, suggested he was resigned to the visit, calling it a way to "return to normal relations" with Libya.

The trip "will, I hope, allow us to highlight this country's return to the international community," Kouchner told France Inter radio.

Sarkozy wants to keep France in the running for hefty contracts in oil-rich Libya but also to send a signal to countries such as Iran, involved in a standoff over its disputed nuclear program, that benefits await those who abide by international rules.

Gadhafi last visited France in 1973. He took his first step toward ending years as an outcast in a meeting with European Union officials in Brussels in 2004, a year after announcing he was dismantling Libya's clandestine nuclear weapons program.

His visit follows his decision in the summer to free five Bulgarian nurses and a Palestinian doctor who had spent eight years in Libyan jails on allegations that they had contaminated more than 400 children with the AIDS virus. The release was the final obstacle to normalizing ties.

The six were released after mediation by the EU and Cecilia Sarkozy, the president's former wife who negotiated with Gadhafi. Sarkozy then traveled to Libya. The Sarkozys have since divorced.

Last week, France signed a nuclear cooperation accord with Algeria, Libya's neighbor in North Africa. There, Sarkozy said sharing civilian nuclear technology with Muslim nations "will be one of the foundations of a pact of trust" the West must conclude with Muslim nations.