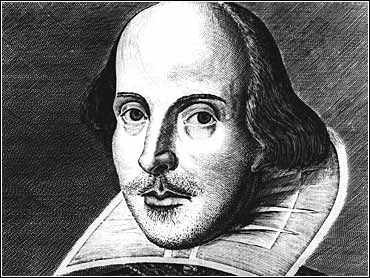 All the world’s a stage and all the men and women merely players. But not, it seems, when it comes to Stratford Upon Avon and the most famous theatrical company in the world.

The future of the works of William Shakespeare is the subject of an intense battle to increase audiences. And the men and women in tights are at each others' sequinned throats. You see, the artistic director of The Royal Shakespeare Company, the company that has seen the likes of Dame Judy Dench, Maggie Smith, Charles Laughton, Kenneth Branagh and Ian McKellan tread its boards, recently announced that the theatre in Stratford Upon Avon would simply have to go. Be torn down. And that to keep Bill Shakespeare up to date, to make him relevant, to compete with the likes of Busch Gardens and Universal, a ‘Shakespeare Village’ should be built in its place.

Certainly there would be plays performed. But the key element would be a sort of ‘William Shakespeare Experience’. “Hold", shuddered the greatest actors in the land, "this is little short of the Disneyfication of the finest playright in history!" What next they cried, Anne Hathaway Burgers, Oberon T Shirts, King Lear spectacles, Macbeth Daggers, Pizza Hamlet to go with extra spicy beef? The Midsummer Night's Dream wooden roller coaster with spooky Bottom experience? Well, by the time everyone had had their say, the artistic director had quit. But his successor set the cat amongst the Shakespearian pigeons once again. Roger Boyd doesn't want the Shakespeare village.... he wants stars. Mr. Boyd reckons that the only way to pack theatres is with big movie stars headlining. The big theatrical stars of The Royal Shakespeare Company are, unsurprisingly, not amused.

I've talked to some of them and their views of movie stars are, for the most part unbroadcastable. But they come down to... 1. They can't do it night after night. 2. Some of them can't act anyway. 3. they simply can't act big enough for a theatre holding three thousand people. Our distinguished actor Donald Sinden, who has a voice that could cross the Atlantic unaided by any technical device, said: "Nicole Kidman is a wonderful actrees, but to hear her would require a very small theatre indeed". Oh dear.

In the words of the great man himself: “The fault, dear Brutus, is not in our stars, but in ourselves.”