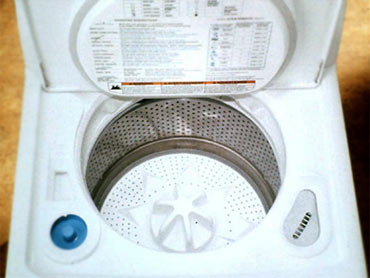 If it seems like you're doing laundry all the time, you're not alone.

It consumes much more of our time than most of us realize.

Gallup's annual Social Series Lifestyle poll on what a typical American does in a typical day indicated laundry was one of the top tasks for both men and women. Sixty-eight percent of wives and 10 percent of husbands did laundry in a typical day, with both spending approximately 2.8 and 2.1 hours, respectively, on housekeeping, including laundry.

The Environmental Protection Agency says the average family washes nearly 400 loads of laundry a year -- more than load a day -- and Americans spend more than $3 billion on detergent.

But while many people to loathe laundry day, when it's time to get down and dirty with your family's clothing, there are ways to make the job more environmentally-friendly and get better results, while saving money, as well!

Green living expert Danny Seo, a syndicated columnist and author of the "Simply Green" book series and of "Do Just One Thing," spelled them out, on "The Early Show Saturday Edition".

First, bear in mind that 90 percent of the energy used by a washing machine is for heating water; cold water washing can yield significant energy savings.

There are innovations and products that aren't just more Earth-friendly, they're designed to cut back on the amount of time, money and resources used to do laundry.

IF YOU NEED A NEW WASHER, NOW IS THE TIME TO BUY

The Department of Energy recently allocated $300 million to all 50 states as part of its "Cash for Appliances" rebate program. States have compiled different rules and regulations on when their programs will start, what will qualify and how you can apply the rebate savings. The overall rule is that only Energy Star-rated appliances will be eligible. That means for states offering rebates on washing machines, the same rebate won't apply to the matching dryer, since no dryers currently qualify for the Energy Star mark. So, if your dryer is working fine, just buy the washing machine to take advantage of the rebate. All programs are starting at different times -- from February to April -- and will continue until all the funding is used up. Keep track of your state at EnergySavers.gov/Rebates.

Seo showed a Whirlpool Duet Energy Star-qualified washer. It uses 74 percent less water and 80 percent less energy than a typical washer and can save up to $900 in energy costs, basically paying for itself.

One dirty secret of the laundry business is that we're all guilty of over-dosing. If you've ever filled a washing machine with clothes you felt could use an extra boost of cleaning power, you may have added more than the recommended amount of detergent. Believe it or not, that can actually make your clothes dirtier.

Since washing machines are becoming more energy- and water-efficient, too much detergent can leave a film on your clothes. Since detergent is designed to attract dirt, wearing overdosed clothing can actually make them dirtier, faster, when you wear them, causing you to wash your clothes more often. And residual detergent inside the machine can build up, causing the machine to work less efficiently and leaving a mildew smell.

To "clean" your washing machine, pour two cups of white vinegar and run the machine as usual. That will remove all the residual soap and give you a clean palette to start from.

One of the drudgeries of laundry is hauling the heavy jug of detergent home from the grocery store. It was only in 2007 that Wal-Mart mandated that detergent sold in their stores had to be a minimum of two-times concentrated, which led to smaller bottles and a savings of 95 million pounds of plastic resin. Less-watered down formulas saved 400 million gallons of water. Three years later, a detergent bottle so small it can fit in your front pocket will be debuting. It's eight-times concentrated and features a patented precise pump that delivers the exact amount of detergent needed, with no messy caps or drips on the side of the bottle. For city-dwellers, busy moms and anyone who dreads dragging a heavy bottle to the laundromat or home from the store, this is a revolution in laundry.

LET YOUR HAMPER SORT FOR YOU

Nothing can ruin a load of laundry like a red sock mixed with a load of whites. To save on the thime it takes to sort through dirty clothes spread all over the floor or on the table at the laundromat, invest in a three-compartment hamper that sorts whites, colors and delicate clothes for you. Each compartment is marked clearly with a sign, so every member of your family knows what goes in which bin. For apartment dwellers, three-compartment tote bags are also available for smaller washes.

SPEED UP THE DRYING PROCESS

While a clothesline may be the greenest option, it's not the fastest or practical for most people. To save time, try to dry one batch of clothes after another; the residual heat from the first batch will dry the next one faster. Add a DRY towel to a batch of wet clothes in the dryer; the towel will absorb moisture while the clothing dries and speed up the drying process. When drying towels and bedding, throw in two tennis balls saturated with fabric softener; the balls will help fluff the towels and bedding to speed up drying, keep them softer and less-wrinkly, and save you money, since you won't need to invest in fabric softener sheets.