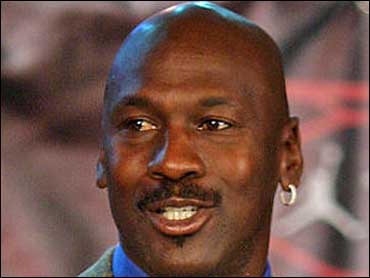 A legal action was taken the other day that is so outrageous that it actually gives frivolous lawsuits a bad name. Allen Heckard, of Portland Oregon, is suing Michael Jordan and Nike because Heckard claims that he's tired of people thinking he looks like Jordan. Heckard says people come up to him all the time, mistaking him for the basketball legend, and he's fed up with it.

I've seen pictures of Heckard, and he doesn't look like Jordan to me. But I guess that's for our legal system to decide. He's eight years older than Jordan, and somewhere between three and six inches shorter. Granted, he's an African-American, has a shaved head, and wears an earring in his left ear. Oh, I almost forgot. He also likes to wear Air Jordans on his feet.

If your first reaction is, "I can't believe this guy is suing," before jumping to that conclusion, I think you should learn the specifics of the lawsuit: He is suing Jordan for defamation and permanent injury as well as emotional pain and suffering. He's also suing Nike founder Phil Knight for helping to make Jordan one of the most recognized men in the world. All right. Now you can say, "I can't believe this guy is suing."

And he's not just suing for a couple of bucks. He's asking for $832 million — $416 million from Jordan and the same from Knight. Heckard paid the $206 filing fee himself, and so far, doesn't have a lawyer. But once word gets out, I'm sure there will be many concerned attorneys who will rush to Heckard's "permanently injured" side.

When asked how he arrived at the $416 million amount, Heckard responded quite logically: "Well, you figure with my age and you multiply that by seven and, ah, then I turn around and, ah, I figure that's what it all boils down to."
Once again, a simple lawsuit is obscured in fancy legalese.

What doesn't he like about being mistaken for Michael? It's simple: "I want to be recognized as me, just like Michael's recognized as Michael."

Do you get the feeling that our society is just a bit too litigious? For a little over $200, this guy is able to force both Jordan and Nike to respond. Shouldn't there be some consequences for filing "nuisance" suits? Maybe instead of claiming that "he can't live a normal life" because of his resemblance to Jordan, if he loses, he should be forced to admit publicly that "he can't live a normal life" because it's not normal to sue people because of the way they look.

But maybe we should try to look at this from Heckard's point of view. This whole thing could have been avoided if Michael Jordan had acted responsibly and with some sensitivity. If Michael had any common sense at all, before he started shaving his head and wearing an earring, he should have realized that some people were going to see a resemblance between him and somebody he never heard of named Allen Heckard.

Usually, when someone thinks they look like somebody famous, they're the ones you might feel like suing — for being annoying. We've all experienced this. We've met people who say things like, "Everybody thinks I look just like George Bush, but I guess you can tell that. I sent a photo to the president, but I never heard back." Or, "Hey, this is my wife. Doesn't she look just like Michelle Pfeiffer?" Or what's worse, "My daughter not only looks just like Barbra Streisand, she sings like her, too. Listen."

At least nine times out of ten, the person doesn't look or sound anything like the celebrity. It's just in his or her head. They want to look like somebody famous.

So, maybe we should congratulate Mr. Heckard on not being caught up in celebrity worship like so many people in our society. He doesn't want to be mistaken for Michael Jordan. He wants to be known for himself. He just wants to live his life as Allen Heckard. He doesn't want people to make a fuss over him. So, he's doing what anyone would do who wants to live a quiet, anonymous life: he's suing a celebrity for hundreds of millions of dollars.