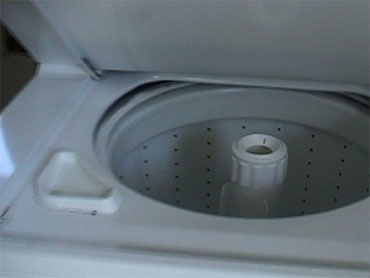 You'd think the washing machine would be the cleanest place in the house - but is it?

In our continuing "Germ Warfare" series, "Early Show" consumer correspondent Susan Koeppen tested washing machines in homes and laundromats to see if they're actually as clean as people think.

Dr. Chuck Gerba is a microbiologist at the University of Arizona told CBS News, "That's why you never want to do your underwear with your handkerchiefs because your bacteria transfers back and forth. You'll be blowing your nose with what's in your underwear."

Microbiologist Ron Schnitzer said your washing machine may clean your clothes, but contrary to what you might think, it probably isn't killing germs. Instead, he said the bacteria isn't killed, it's diluted.

And hot water, Schnitzer said, may not even do the trick.

He said water temperatures above 180 degrees are needed to kill the bacteria in your clothing. However, he said most homes do not have water that hot.

As for laundromats, they had very low bacterial counts in Koeppen's tests. Why? It could be the water is hotter and the machines are cleaned.

To clean your home machine, Schnitzer recommended every two to three cycles you run an empty cycle with bleach to get rid of bacteria.

For more with Koeppen on washing machine germs, click on the video below.