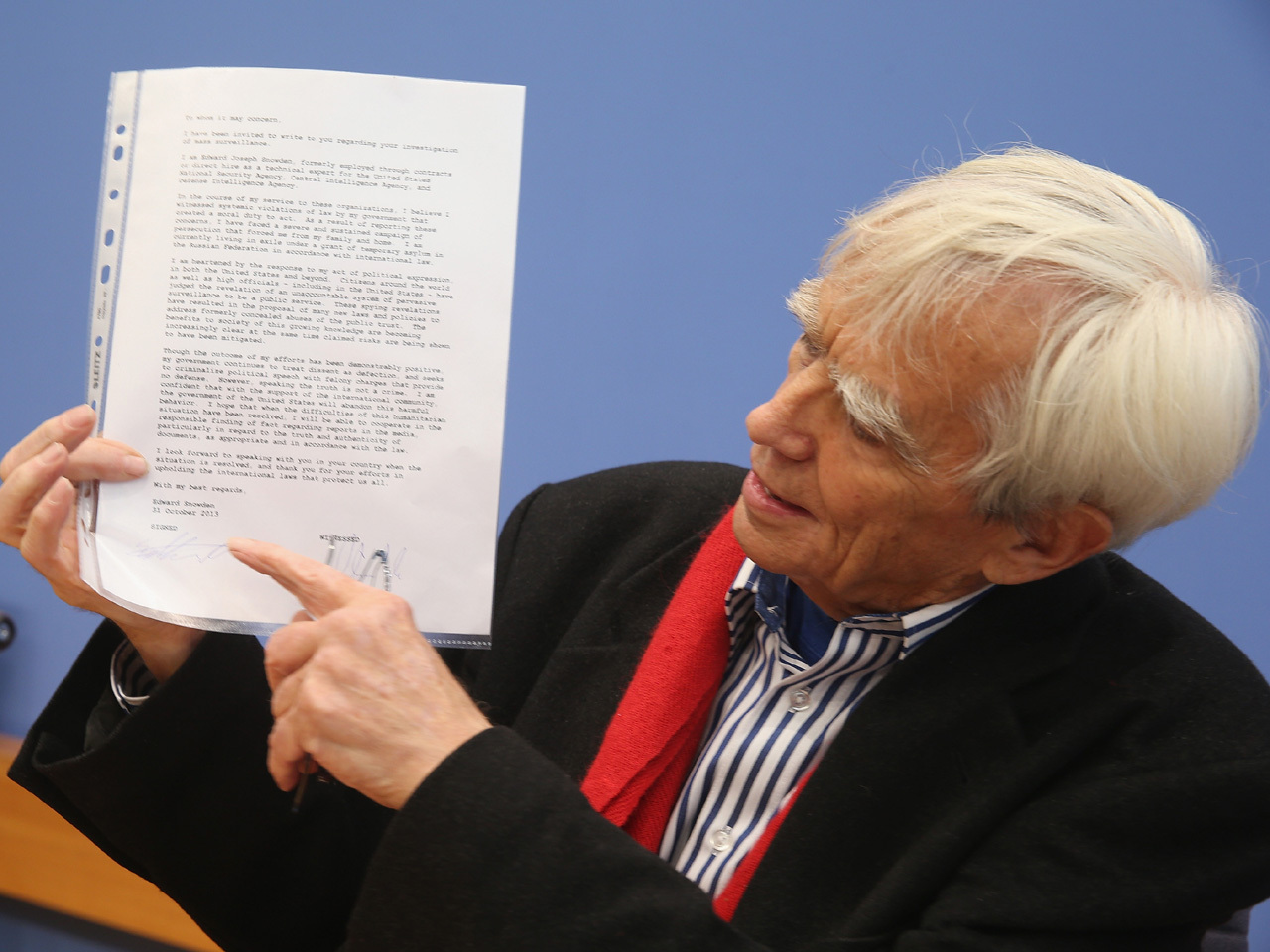 BERLIN Germany's top security official said Friday he will try and find a way for Edward Snowden to speak to German officials if the former National Security Agency contractor is willing to provide details about the NSA's activities including the alleged surveillance of Chancellor Angela Merkel's cellphone.

The comments by Interior Minister Hans-Peter Friedrich came after a German opposition lawmaker traveled to Moscow and met NSA leaker Snowden. The lawmaker, Hans-Christian Stroebele, returned to Berlin with a letter he said Snowden had written, which he released Friday.

In the letter Snowden, who faces espionage charges in the U.S., indicated that he will not speak with German officials until the United States stops its prosecution of leakers like him.

"Though the outcome of my efforts has been demonstrably positive, my government continues to treat dissent as defection, and seeks to criminalize political speech with felony charges that provide no defense. ... I am confident that with the support of the international community, the government of the United States will abandon this harmful behavior," Snowden wrote in the letter. "I look forward to speaking with you in your country when the situation is resolved, and thank you for your efforts in upholding the international laws that protect us all," he said.

Stroebele is a prominent critic of the NSA's alleged activities.

The release of the letter came after Friedrich said that "if the message is that Mr. Snowden wants to give us information, then we will be glad to accept that."

"We will find a way to make a conversation possible if Mr. Snowden is prepared to talk to German officials," Friedrich said, according to the newspaper Die Zeit.

He added, however, that he understood Friedrich to be referring primarily to the possibility of officials speaking to Snowden in Russia, where he has been granted asylum.

Germany is seeking answers from U.S. authorities to allegations Merkel's cellphone was monitored, which prompted the German chancellor to complain to Obama last week. Merkel's foreign policy adviser and intelligence coordinator held talks on the issue in Washington on Wednesday.

Germany's government, along with many others, rejected an asylum request from Snowden earlier this year.

Teschke said Friday that, if Snowden now wanted asylum in Germany, he would have to come to the country and then apply for it -- but noted that Germany has an extradition treaty with the United States.

German federal prosecutors are looking into whether there are grounds to investigate the allegations regarding Merkel's cellphone, but it is unclear when they might decide. Germany's parliament is expected to discuss the NSA's alleged activities Nov. 18 and lawmakers may decide to set up a commission of inquiry.

Thomas Oppermann, a lawmaker who heads a parliamentary panel that oversees German intelligence, said on Twitter that if there's an opportunity to hear Snowden as a witness without endangering him and without "completely ruining" German-U.S. relations, it should be taken. Oppermann is a member of the center-left Social Democrats, who are negotiating with Merkel's conservatives to form a new German government after September elections.

Snowden was granted asylum in Russia in August after being stuck at a Moscow airport for more than a month following his arrival there from Hong Kong. The 30-year-old faces espionage charges in the U.S.

Text of letter from Edward Snowden

To whom it may concern:

I have been invited to write to you regarding your investigation of mass surveillance.

In the course of my service to these organizations, I believe I witnessed systemic violations of law by my government that created a moral duty to act. As a result of reporting these concerns, I have faced a severe and sustained campaign of persecution that forced me from my family and home. I am currently living in exile under a grant of temporary asylum in the Russian Federation in accordance with international law.

I am heartened by the response to my act of political expression, in both the United States and beyond. Citizens around the world as well as high officials -- including in the United States -- have judged the revelation of an unaccountable system of pervasive surveillance to be a public service. These spying revelations have resulted in the proposal of many new laws and policies to address formerly concealed abuses of the public trust. The benefits to society of this growing knowledge are becoming increasingly clear at the same time claimed risks are being shown to have been mitigated.

Though the outcome of my efforts has been demonstrably positive, my government continues to treat dissent as defection, and seeks to criminalize political speech with felony charges that provide no defense. However, speaking truth is not a crime. I am confident that with the support of the international community, the government of the United States will abandon this harmful behavior. I hope that when the difficulties of this humanitarian situation have been resolved, I will be able to cooperate in the responsible finding of fact regarding reports in the media, particularly in regard to the truth and authenticity of documents, as appropriate and in accordance with the law.

I look forward to speaking with you in your country when the situation is resolved, and thank you for your efforts in upholding the international laws that protect us all.

With my best regards,