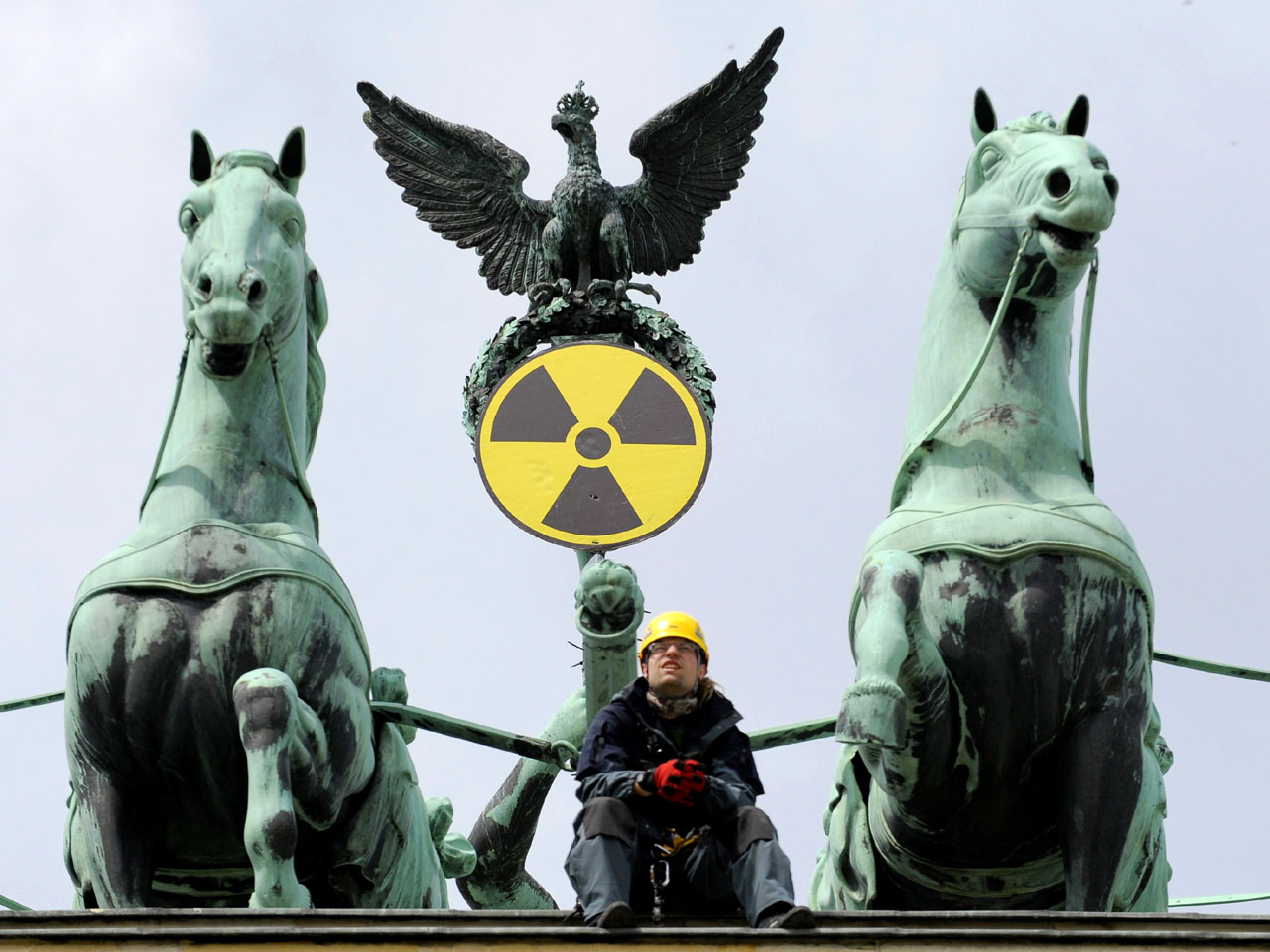 Chancellor Angela Merkel said she hopes the transformation to more solar, wind and hydroelectric power serves as a roadmap for other countries.

"We believe that we can show those countries who decide to abandon nuclear power — or not to start using it — how it is possible to achieve growth, creating jobs and economic prosperity while shifting the energy supply toward renewable energies," Merkel said.

Merkel's government said it will shut down all 17 nuclear power plants in Germany — the world's fourth-largest economy and Europe's biggest — by 2022. The government had no immediate estimate of the transition's overall cost.

The plan sets Germany apart from most of the other major industrialized nations. Among the other Group of Eight countries, only Italy has abandoned nuclear power, which was voted down in a referendum after the 1986 Chernobyl disaster.

The decision represents a remarkable about-face for Merkel's center-right government, which only late last year pushed through a plan to extend the life span of the country's reactors, with the last scheduled to go offline around 2036. But Merkel, who holds a Ph.D. in physics, said industrialized, technologically advanced Japan's "helplessness" in the face of the Fukushima disaster made her rethink the technology's risks.

Phasing out nuclear power within a decade will be a challenge, but it will be feasible and ultimately give Germany a competitive advantage in the renewable energy era, Merkel said.

"As the first big industrialized nation, we can achieve such a transformation toward efficient and renewable energies, with all the opportunities that brings for exports, developing new technologies and jobs," Merkel told reporters.

At the time of the Japanese disaster, Germany got just under a quarter of its electricity from nuclear power, about the same share as in the U.S.

While Germany already was set to abandon nuclear energy eventually, the decision — which still requires parliamentary approval — dramatically speeds up that process. Environment Minister Norbert Roettgen said there are no provisions that would allow a later policy reverse.

"We don't only want to renounce nuclear energy by 2022, we also want to reduce our CO2 emissions by 40 percent and double our share of renewable energies, from about 17 percent today to then 35 percent," the chancellor said.

Merkel said the cornerstones of Germany's energy policy will also include a safe and steady power supply that doesn't rely on imports, and affordable prices for industry and consumers. The plan calls for more investment in natural gas plants as a backup to prevent blackouts, the chancellor said.

French Prime Minister Francois Fillon, whose country relies on nuclear power to produce 80 percent of its electricity supply, insisted "there's no way" for the European Union to meet its emission-cutting targets without at least some nuclear power.

"We respect this decision, but it doesn't cause us to change our policy," Fillon said. France operates more than one-third of the nuclear reactors in the EU.

Sweden's Environment Minister Andreas Carlgren also criticized the German decision, telling The Associated Press that the focus on an end date was unfortunate and could drive up electricity prices across Europe.

Germany, usually a net energy exporter, has at times had to import energy since March, with the seven old reactors shut and others temporarily off the grid for regular maintenance. Still, the agency overseeing its electricity grid, DENA, said Friday that the country remains self-sufficient and that its renewable energy production capacity this spring peaked at 28 gigawatts — or about the equivalent of 28 nuclear reactors.

Many Germans have vehemently opposed nuclear power since Chernobyl sent radioactivity over the country. Tens of thousands of people took to the streets after Fukushima to urge the government to shut all reactors quickly.

A decade ago, a center-left government drew up a plan to abandon the technology for good by 2021 because of its risks. But Merkel's government last year amended it to extend the plants' lifetime by an average 12 years — a political liability after Fukushima was hit by Japan's March 11 earthquake and tsunami.

"The country is throwing its weight behind clean renewable energy to power its manufacturing base and other countries like Britain should take note," said Robin Oakley, Greenpeace UK's campaigns director.

German industry said the government must not allow the policy changes to lead to an unstable power supply or rising electricity prices.

Hans-Peter Keitel, the president of the Federation of German Industries, urged the government not to set the exit date of 2022 in stone but to be flexible if problems arise.

Switzerland, where nuclear power produces 40 percent of electricity, also announced last week that it plans to shut down its reactors gradually once they reach their average life span of 50 years — which would mean taking the last plant off the grid in 2034.

Germany's decision broadly follows the conclusions of a government-mandated commission on the ethics of nuclear power, which on Saturday delivered recommendations on how to abolish the technology.

"Fukushima was a dramatic experience, seeing there that a high-technology nation can't cope with such a catastrophe," Matthias Kleiner, the commission's co-chairman, said Monday. "Nuclear power is a technology with too many inherent risks to inflict it on us or our children."