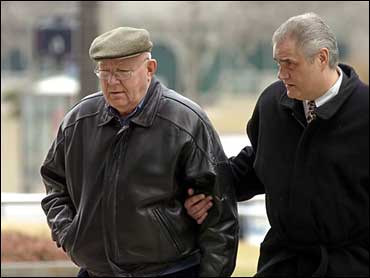 German prosecutors said Wednesday they have charged retired Ohio auto worker John Demjanjuk with more than 29,000 counts of accessory to murder for his time as a guard at the Nazis' Sobibor death camp, and will seek his extradition from the U.S.

Demjanjuk is accused of participating in the murders while he was a guard at the Nazi camp in occupied Poland between March and September 1943.

"In this capacity, he participated in the accessory to murder of at least 29,000 people of the Jewish faith," Munich prosecutors said in a statement.

The 88-year-old Demjanjuk, who lives in a Cleveland suburb, denies involvement. His son, John Demjanjuk Jr., said Wednesday he would return a call later with comment. A family spokesman, former Demjanjuk son-in-law Ed Nishnic, did not immediately return a call seeking comment.

Efraim Zuroff, the top Nazi hunter at Israel's Simon Wiesenthal Center, said he was "very pleased that the German authorities have taken this step."

"We hope that the process can be expedited to ensure that this Holocaust perpetrator will finally be appropriately punished," Zuroff told the AP in a telephone interview from Jerusalem. "We're on our way to a victory for justice today."

A native of Ukraine, Demjanjuk emigrated to the U.S. in 1952 and gained citizenship in 1958.

In denying involvement in war crimes, he has said he served in the Soviet army and became a prisoner of war when he was captured by Germany in 1942.

Demjanjuk was extradited to Israel in 1986, when the U.S. Justice Department believed he was the sadistic Nazi guard known as Ivan the Terrible from the Treblinka death camp.

He spent seven years in custody before the Israeli high court freed him after receiving evidence that another Ukrainian was that Nazi guard.

Demjanjuk's U.S. citizenship was restored in 1998, but the U.S. Justice Department renewed its case, saying he was another Nazi guard and could be deported for falsifying information on his entry and citizenship applications in the 1950s.

A December 2005 U.S. court ruling determined that he could be deported to his native Ukraine or to Germany or Poland, but Demjanjuk spent several years challenging that ruling.

Last year, the U.S. Supreme Court chose not to consider Demjanjuk's appeal against deportation, clearing the way for the Justice Department's Office of Special Investigations, which oversees cases against former Nazis, to seek his removal from the United States.

But it was unclear which country would take him - his native Ukraine, Poland or Germany.

Now, the Munich prosecutor's office, which is handling the case because Demjanjuk spent time at a refugee camp in the area after the war, said it was working on the extradition request with the German government.

Munich prosecutors credited help from the U.S. Office of Special investigations in clarifying the validity of Nazi-era identity papers in enabling them to file charges against Demjanjuk.

They said Demjanjuk will be formally charged before a judge once he is extradited to Germany.