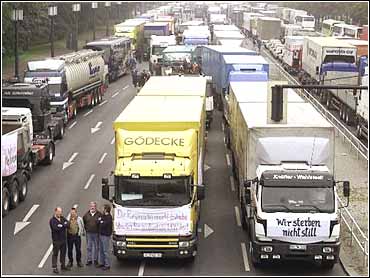 Thousands of truckers from across Germany clogged the streets around the capital's center Tuesday demanding relief from higher gas prices. And they got some when the government offered low-interest loans to some trucking companies.

The protest is the biggest so far in Germany, on the heels of demonstrations that halted traffic in France, Britain and Spain before easing in recent days. Elsewhere Tuesday, minor blockages continued in Spain, where markets ran out of fish, and Greek motorists fearing for shortages due to trucker strikes lined up for gas.

At least 2,000 trucks blocked the tree-lined avenue that runs through Berlin's central Tiergarten park to the Brandenburg Gate, where thousands of people called on Chancellor Gerhard Schroeder's government to relax an "ecology tax" that, along with higher oil prices, has led to more expensive gas.

The German government showed no sign of caving in on taxes, unlike France, but did offer one concession when Transport Minister Reinhard Klimmt announced loans to middle-sized trucking companies running into cash shortages because of spiraling fuel costs. The step follows breaks for commuters offered last week.

But the new loan offer was rejected by the truckers' association and the demonstrators.

"When you've got a sound business you don't need cheap credit," said Peter Kofahl, 43, who runs his own transport firm with eight buses and four trucks in Rostock.

The protest appeared to be running in German-like organized fashion, with police claiming traffic chaos was avoided because many commuters heeded warnings about tie-ups.

But after a rally at the Brandenburg Gate, a group of about 2,000 protesters broke off against the pleas of organizers and headed to the nearby Reichstag before police were able to stop them. They shouted "We are the people!" at the parliament members inside, echoing the cry of demonstrators in former East Germany protesting the communist regime.

That prompted the vice president of the parliament, Anke Fuchs, to tell the truckers by megaphone that lawmakers understood their concerns. She invited several truckers inside to talk.

Truckers left lanes open to allow public transport through, and police blocked off access streets to prevent a major snarl. The drivers were cooperating with police by assembling at collection points to be escorted into the city.

"We don't want any trouble, but we have to do something as our jobs depend on it," said Harald Grueninger, a 41-year-old trucker from the western city of Fulda.

Karl-Heinz Schmidt, head of a national association of truck drivers, told ARD television that the protest was the "last chance" for the truckers to seek relief. He said 100,000 jobs were endangered by the high gas prices.

Despite efforts to reroute commuters, there were reports of traffic jams up to 20 kilometers (12 miles) long in te outskirts. Some of those inconvenienced by the demonstration showed little sympathy.

"Do we really need so many trucks? There are ships and trains that could do this," said Michael Helmchen, 64, a management consultant who left his car at home and was walking to work. "Everyone can lose their jobs at a moment's notice in today's world."

In the southern city of Nuremberg, about 140 protesting farmers on tractors drove through the city but traffic wasn't affected.

In Spain, Barcelona markets ran out of fresh fish Tuesday while supplies in Valencia ran low after a week of fishermen's strikes and blockades to protest rising fuel costs. In Seville, farmers with tractors and trucks surrounded a regional fuel depot to stop fuel deliveries.

Greek motorists lined up at gas stations Tuesday for a second day over fears that a trucker strike there would lead to fuel shortages.