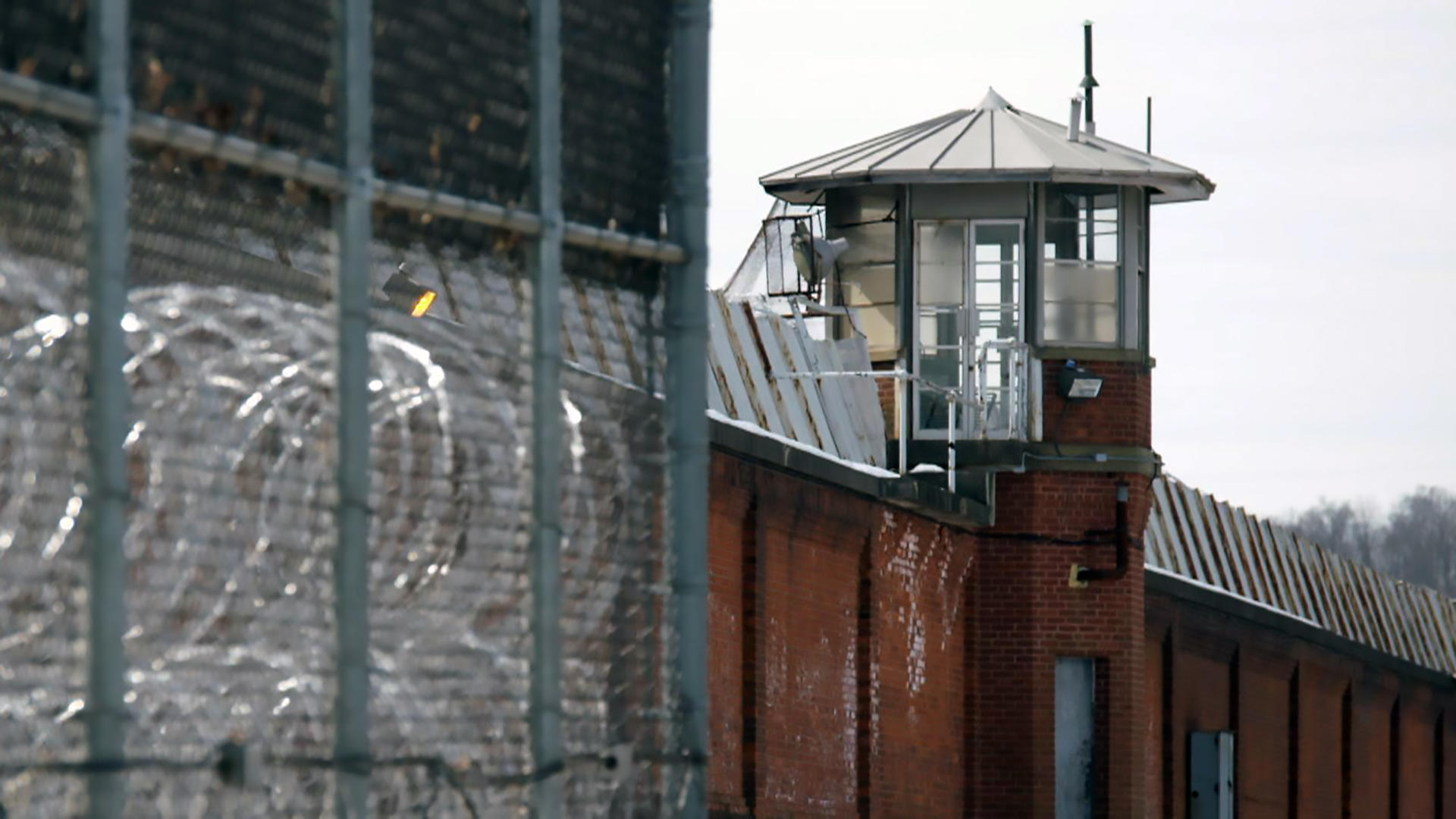 One of the more radical attempts at prison reform is taking place in a foreboding Connecticut prison nicknamed the Rock.  It's a two year old program based on therapy for 18-25 year old prisoners, whose brains, science shows, are still developing, and their behavior more likely to change.  The idea came from Germany where the main objective of prison is rehabilitation and where the recidivism rate is about half that of the U.S. We were in Germany four years ago when then Connecticut Governor Dannel Malloy toured the prison system. He returned home inspired and launched the small, German style program at the Rock. It's too early to tell whether it will reduce recidivism but we wanted to see how the German approach is being tested in America. So, we went to Connecticut by way of a slight detour to the northeast corner of Maine.

The University of Maine at Presque Isle is small in the world of college basketball. But for number 10, Shyquinn Dix, being a student-athlete here is the biggest shot of his life.

Shyquinn Dix: Being able to be around a place where I could just be me and, like, work on myself, and live out my dream is, like, wonderful to me.

Bill Whitaker: I've heard that you're the best player on the team.

Bill Whitaker: How 'bout in the classroom?

Shyquinn Dix: Actually made the Dean's List. 3.8 this semester. All A's.

Crazy because when we first met him a year ago, Presque Isle number 10 was inmate number 391175 serving a four-year sentence for felony check fraud at Cheshire Correctional Institution, a maximum security prison in central Connecticut that houses about 1,300 prisoners. Warden Scott Erfe has spent 30 years working in the state prison system. He told us Cheshire corrections officers were as firm and unyielding as the century-old prison walls.

Warden Scott Erfe: When you think of Alcatraz, old-school corrections, old school mentality-- that is Cheshire.

Bill Whitaker: What gets you here to Cheshire?

Warden Scott Erfe: We have everybody from-- short-termers to everything all the way up to and including-- a serial killer. There are some bad people here.

The warden told us prisoners can be locked up 22 hours a day with just an hour of recreation in the morning and afternoon. So when former governor Dannel Malloy asked him to build a program modeled on the prisons he'd toured in Germany, which are much more relaxed, focused on counseling and personal growth, Erfe told us he was dumbfounded.

Bill Whitaker: Did you think it was crazy?

So Warden Erfe got to work. He closed down a solitary confinement wing and opened up a sanctuary for self-improvement for about 50 young inmates, whose crimes range from drugs to violent assault. They have to apply to get into the program called T.R.U.E., for truthful, respectful, understanding and elevating to success.

Bill Whitaker: What's going on here that I'm not seeing?

Warden Scott Erfe: You wouldn't have correctional officers playing board games with the inmates. That's just not done in general population I mean, everybody here, you can tell, is just totally relaxed.

Totally. Inmates turned one cell into a yoga studio splashed with a colorful mural to set the mood. Prisoners and staff mingle freely.  The prisoners are out of their cells from morning to night - their days filled with classes and counseling.

It's still prison, but the general atmosphere is lighter here.

It can be head-spinning for corrections officers originally trained to guard with an iron fist.

This might seem frivolous, but it's a serious part of the T.R.U.E. experiment. The goal: to rebuild these men with experiences, structure and discipline they might not have had before. But the head of the Cheshire corrections officers union told us T.R.U.E. is turning prison into summer camp.

Bill Whitaker: They think it's too lenient, they think it puts the corrections officers at risk.

Warden Scott Erfe: Not at all. Not at all. Numbers don't lie. Our incident rate is a lot lower in T.R.U.E. than it is in general population.

In the general population, violence is common. Yellow uniforms ID dangerous convicts. Warden Erfe says in the two years of T.R.U.E. There hasn't been a single fist fight or assault on staff.

Lt. Daniel Quinn was brought up using the old school approach. Now he finds himself defending the T.R.U.E. way.

Bill Whitaker: So what were you hearing from your fellow officers who are not in this unit?

Lt. Ashley McCarthy: Cookies and milk. That's one I heard a lot of--

Lt. Ashley McCarthy told us in her nine years in corrections she's never experienced anything like this.

Lt. Ashley McCarthy: You don't have to put on the face of strength 100 percent of the time because that's what you have to do in general population. You can't show a weakness, or a deficiency.

Lt. Ashley McCarthy: It's more human is what it is.

Warden Scott Erfe: It's kinda like going into La La Land from general population. But-- they quickly see that everybody is here to help.

Warden Scott Erfe: Their punishment is their incarceration. It's not our job as correctional professionals to punish somebody even more while they're incarcerated.

T.R.U.E. aims to recast young lives with incentives. Repeated bad behavior, like profanity and bad attitude, has gotten twelve shipped back to the general population. Good behavior earns benefits, like longer family visits, movies, classes, a prison job. When Shyquinn Dix ended up here in T.R.U.E., he thought, "this can't be real."

Shyquinn Dix: I thought it was some BS because of just the stuff they were saying. I never even heard of it before.

Shyquinn Dix: Like-- "Oh, the correctional officers and staff here care about you. You get a second chance at life if you take it serious."

Bill Whitaker: You thought all that was BS?

Until Corrections Officer James Vassar took an interest in him. Impressed by Shyquinn Dix's talent and repentance, Officer Vasser said he'd help him pursue his dream of playing basketball in college.

Bill Whitaker: Did you believe him?

Shyquinn Dix: Nah, not at the time.

Bill Whitaker: What'd you see in him?

Corrections Officer James Vassar: I seen a kid with talent that made a mistake.

Bill Whitaker: So there are all these other--

Corrections Officer James Vassar: Steps. But they're-- longshots, and boy, we were hittin' 'em. (LAUGHTER)

Shyquinn Dix could see a way out. Festim Shyqeriu was lost. At 22, he was sentenced to 13 years in Cheshire for robbing convenience stores and a bank. He told us he was selfish and violent.

Bill Whitaker: What's that like being thrown into the general population in a maximum security prison?

Festim Shyqeriu: It's really scary at first. And so you put on a front and you act like you're tough and I'm hoping people don't see how scared I am and just the mess that's going on inside.

Bill Whitaker: Twenty-two hours a day in the cell?

Festim Shyqeriu: Yes just waiting to be let out like a caged animal.

When Warden Erfe selected him for the T.R.U.E. unit, Shyqeriu didn't care about improving himself, he just wanted out of his cell, but immediately found himself in a different world.

Central to the program is intensive counseling. Through peer and self-criticism, prisoners are forced to face the demons and behavior that put them behind bars.

Bill Whitaker: The warden told us today there's a lotta crying that goes on up here. That true?

Festim Shyqeriu: (LAUGHTER) I would have to agree with that.

Bill Whitaker: What has made you cry?

Festim Shyqeriu: My family. The problem with awareness and understanding the pain you've caused people is that you realize how much pain you've caused the people that love you and once you have to face that and look at yourself in the mirror, that's tough.

To prepare the prisoners for life outside Cheshire's walls, Warden Erfe tapped some unlikely helpers: respected, older prisoners serving life sentences. They are now trained to serve as mentors for the young men in T.R.U.E. Isschar Howard was one of the first to sign on.

Isschar Howard: All we knew was we was gonna try and stop these young cats from becoming us. 'Cause you don't want this.

Isschar Howard shot and killed two men in a fight over drug turf in New Haven. In prison, he assaulted inmates and staff and spent a total of five and a half years in solitary confinement before deciding to take a different path.

Howard and 20 other lifers are like attentive fathers. They enforce unit rules.

Working with staff, they constantly monitor the young offenders' behavior and assess their progress at regular feedback sessions.

Bill Whitaker: Many people outside of prison would think that someone who is in for life wouldn't necessarily be the kind of person you'd want to be teaching you life lessons. So what have they done to help you?

Festim Shyqeriu: They've helped me learn how to speak in a way that I can articulate my thoughts and emotions instead of just getting mad and wanting to hit something.

Shyqeriu told us he has grown under their guidance. He's earned the right to go to work every day in the prison shop.  He now enjoys warm visits with his family.

Festim Shyqeriu: I feel like everybody has a basic human decency. It's just that it has to be nurtured. To bring it out.

Bill Whitaker: And that's what happens to you in this program?

Isschar Howard: The greatest gift is when they telling me to my face that, "I'm not changing," and then five months later be on their best behavior.

Bill Whitaker: You're in here for life. You could just sit there and say, "To heck with all this."  So, what are you getting out of this?

Isschar Howard: Redemption. I don't have to die a waste. I tell these guys all the time they give me purpose to live. They give me something to leave behind.

For more than 100 years the rock has been a hard place. The T.R.U.E. unit hopes to prove a softer touch can yield better results.

Officer James Vassar convinced coach Dan Kane at Presque Isle to take a shot on a prison inmate. Now Shyquinn Dix is a big man on campus and the pride of the T.R.U.E. unit. His jersey hangs on the wall. A month after leaving, he was back at Cheshire. Not as a repeat offender, but an inspiration.

Shyquinn Dix: I'm trying not to cry. You all know me. I'm gonna cry, you're making me cry. So happy to see y'all. I think about y'all everyday.

Warden Scott Erfe: Keep your grades up. Stay out of here, right? And don't forget us when you get to the NBA.

The budget airline flying under the radar