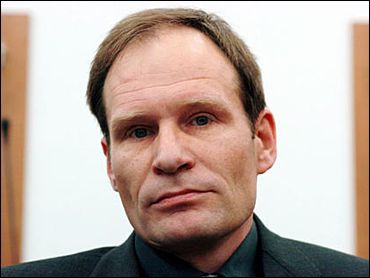 A computer expert accused of killing, dismembering and eating another man who allegedly agreed to the arrangement over the Internet went on trial for murder Wednesday at a court in central Germany.

Prosecutors in the city of Kassel accuse Armin Meiwes of killing a 43-year-old from Berlin, identified only as Bernd Juergen B., in March 2001, by stabbing him in the throat at his home in the town of Rotenburg.

Prosecutors say the killing was carried out with the victim's consent. But they classified it as murder, not — as the defense argues would be appropriate — a form of mercy killing, arguing that the evidence indicated it was carried out at the suspect's initiative.

Meiwes, 42, who has confessed to the killing and subsequent eating, could face a life prison sentence if convicted of murder. Prosecutors say the killing was sexually motivated.

Dressed in a dark suit, Meiwes appeared relaxed as he sat down next to his lawyer at the Kassel state court Wednesday.

CBS News' Peter Bild reports Meiwes told the court he had fantasized about killing and eating people for more than 30 years. Describing a lonely childhood as an only child, Meiwes said he felt this was a way of getting close to somebody.

He expressed regret for the deed.

The suspect allegedly chopped the body into pieces, deep-froze parts of it and buried the rest, capturing the crime on a videotape which is being used as evidence. Police who searched his home found human flesh and bones.

Police tracked down and arrested Meiwes in December last year after a student in Austria alerted them to an advertisement the suspect allegedly placed on the Internet seeking a man willing to be killed and eaten.

A verdict from the court, which is scheduled to hear 38 witnesses, is expected in February.