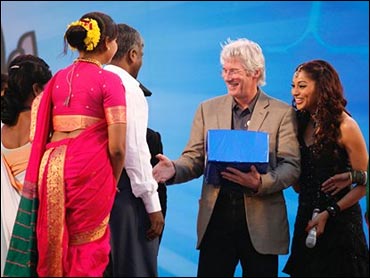 Actor and AIDS prevention activist Richard Gere brought thousands of sex workers in Mumbai to their feet Wednesday, urging them to insist their clients use condoms.

"No condoms, no sex!" shouted Gere at an AIDS awareness event in Mumbai, the country's financial and entertainment hub, better known to many Westerners as the city of Bombay.

He urged the crowd of more than 15,000 sex workers from Mumbai and neighboring Thane district to repeat the chant after him.

The crowd's loudest cheers were reserved for Basu, who performed a song-and-dance number titled "Atmavishwas," or "Faith Within."

Earlier, Gere met sex workers who explained how they use pictures and books to persuade fellow prostitutes to insist on safe sex. But they said it was difficult getting regular customers to use condoms.

Gere, a vocal fighter against HIV and AIDS, had launched the "Heroes Project" four years ago to spread the message of prevention to the average Indian.

India, with 5.7 million infections, has the world's largest number of people living with HIV and AIDS. Campaigns aimed at prostitutes and truck drivers - both high-risk groups - have helped increase knowledge about the disease.

"Before, there was a total lack of knowledge among sex workers about HIV and even about their own bodies," said Gere, whose foundation is involved in campaigns to raise awareness about AIDS prevention, in cooperation with other groups, including the Bill & Melinda Gates Foundation. "Now there is a radical change. When sex workers speak of condoms as a norm, it is a powerful statement, it empowers them."

Aid workers estimate Mumbai has 10,000 sex workers. Ashok Alexander, director of Avahan - an initiative of the Gates Foundation - said it is vital to make the workers the focus of awareness campaigns.

"Our strategy is prevention in the most vulnerable groups," he said. "Their involvement is key, since they are the architects of HIV prevention."

"Sex workers are the foot soldiers. Educating and motivating them is the key to fighting AIDS," Iyengar said.

Vijaymala Dopukwar, a sex worker-turned-aid worker, said she had resisted going for medical checkups until a few years ago.

"The social worker would keep telling me to get checked up, but I was not ill, so I refused to go," she said. "I didn't even know what a condom was, let alone how to use it."

Now she insists other sex workers turn away customers who don't use protection. "I tell them even if the man offers you more money, say 'No."'