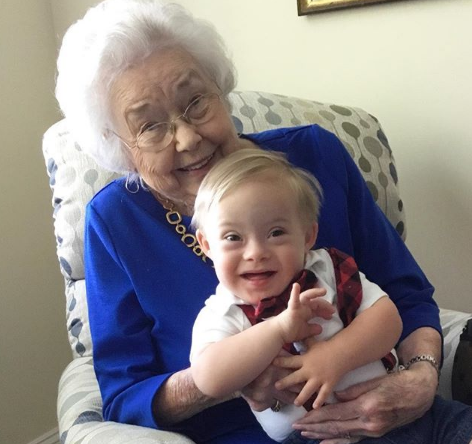 Cook's grandson, Chris Collin, shared the image over the weekend, racking over 56,000 likes on Twitter and quickly going viral. It was also featured on Gerber's Instagram account.

"My grandmother was the Gerber baby," he tweeted. "It was a funny bit of trivia, never made her rich or got us free strained peas or anything. But last week she got to meet the company's newest spokesbaby, named Lucas. Pretty pretttty cute."

Cook, 91, was chosen as the original Gerber baby after her family submitted a charcoal drawing of her when she was four months old to the baby food company in 1928. The image later became the company's official trademark in 1931.

Lucas also became the spokesbaby after a photo search. He is the first child with Down syndrome to be chosen to be a Gerber spokesbaby.

Collin also tweeted a picture with his smiling grandma next to the classic image as further proof.

A Gerber spokeswoman told USA Today Lucas and his family happened to be in Cook's neighborhood and asked Gerber to set up a meeting between the families.

Each year, the company chooses a new baby and family who also take home a $50,000 prize.