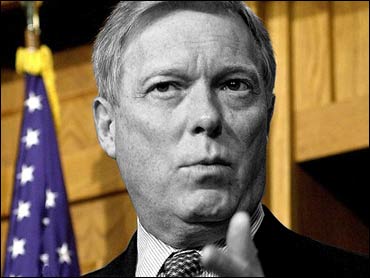 House Democratic leader Dick Gephardt is adding to the verbal fire on Capitol Hill. Speaking Thursday on CBS' "The Early Show," Gephardt said the Bush administration needs to "take security out of politics."

Republicans have accused Democrats of pandering to organized labor by holding up Mr. Bush's homeland security bill in a dispute over labor rights.

Gephardt said it's "ridiculous" to charge that policy disagreements mean Democrats are against homeland security. "They need to stop people in the administration, including the president and the vice president, from making these kinds of statements," said Gephardt, D-Mo.

"I told the president right after Sept. 11 last year that we had to trust each other and that we had to take security out of politics as much as we could," he said. Partisan fights, Gephardt said, "will defeat our purpose of trying to be united and working together to solve these problems."

On Wednesday, Daschle launched an angry tirade against the president, accusing him of seeking to politicize the debate over Iraq and demanding that he apologize for implying that Democrats were not interested in the security of the American people.

Breaking the recent veneer of bipartisanship over Iraq, Daschle demanded an apology from Mr. Bush to the American people and Senate Democrats like Daniel Inouye of Hawaii, who were wounded fighting for their country.

"You tell those who fought in Vietnam and World War II they are not interested in the security of the American people" because they are Democrats, Daschle said. "That is outrageous. Outrageous."

Daschle cited a string of actions by the administration including a comment by Mr. Bush that the Democratic-controlled Senate is "not interested in the security of the American people."

Senate Minority Leader Trent Lott said he was "deeply saddened by the tone and tenor" of Daschle's remarks. "Who is the enemy here?" asked Lott. "The president of the United States or Saddam Hussein?"

Lott, a Mississippi Republican, said that "Sen. Daschle needs to cool the rhetoric. We've got a lot of work to do."

But Democrats literally lined up behind Daschle, including Hawaii's Inohue, who lost an arm fighting the Nazis and spoke more in sorrow than anger.

"There are those who plan war and those who engage in war," he said.

"It grieves me when my president makes statements that would divide this nation."

"It is outrageous, it is insulting. It is wrong, wrong, wrong," said Byrd, who has been an outspoken opponent of the president's Iraq policy.

The White House brushed aside Daschle's call for an apology, saying the Democratic leader based his accusations on newspaper accounts that took Mr. Bush's comments out of context.

"Now is a time for everybody concerned to take a deep breath, to stop finger-pointing, and to work well together to protect our national security and our homeland defense," White House spokesman Ari Fleischer said.

Wednesday's war of words came as congressional leaders negotiated in private with the administration over the terms of a resolution that would authorize the president to use force to eliminate Iraq's weapons of mass destruction.

Despite misgivings by some rank-and-file Democrats, Daschle and Gephardt have both signaled support for such legislation, to be passed before Congress adjourns for the midterm elections.

At the same time, Democratic political strategists have expressed concern that the national debate over Iraq is overshadowing domestic issues in the campaign.

Lott said he thought he, Daschle, Gephardt and House Speaker Dennis Hastert would come to an agreement on the resolution by the end of this week. "I think it's word-tweaking, I don't think there's broad disagreement on terms."

The quote Daschle referred to came during a visit that Mr. Bush made earlier this week to Trenton, N.J.

Speaking at a public event that preceded his appearance at a fund-raiser for Republican Senate candidate Doug Forrester, the president said, "The House responded, but the Senate is more interested in special interests in Washington and not interested in the security of the American people. I will not accept a Department of Homeland Security that does not allow this president and future presidents to better keep the American people secure."