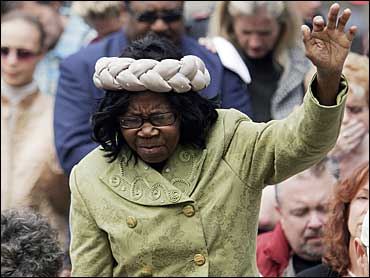 Georgia Gov. Sonny Perdue stepped up to a podium outside the state Capitol on Tuesday and led a solemn crowd of several hundred people in a prayer for rain on his drought-stricken state.

"We've come together here simply for one reason and one reason only: To very reverently and respectfully pray up a storm," Perdue said after a choir provided a hymn.

After 20 months of drought, Lake Lanier, North Georgia's main source of drinking water, has had barely half its typical rainfall, reports CBS News correspondent Mark Strassmann. The levels are 17 feet below normal -- so low that boaters have to walk far out into the lake to get in.

Perdue has ordered water restrictions, launched a legal battle against the release of water from federal reservoirs and appealed to President Bush.

"It's time to appeal to him who can and will make a difference," Perdue told the crowd.

A church choir belted out "What a Mighty God We Serve" and "Amazing Grace" as a keyboardist swayed to the rhythm. While preachers spoke, worshippers chanted "amen," and some stood with eyes closed and arms outstretched.

The hourlong event was billed as an interfaith ceremony but only three Protestant ministers joined Perdue, who is a Baptist, and Lt. Gov. Casey Cagle.

Nearby, some 20 demonstrators from the Atlanta Freethought Society staged a protest against the holding of a religious observance at the seat of state government.

"It's a public disgrace," said Bruckner. "My public leader is making a fool of himself."

Police moved the protesters when they cordoned off the streets before the event, and none were in sight at the end of the service.

Meteorologists said earlier this week there was a slight possibility of rain Tuesday, with some more rain in the forecast Wednesday. After that, little rain was predicted for the rest of the week. The rainfall deficit in Athens and Atlanta is 16 inches, according to the National Weather Service.

"I believe in miracles," declared Pastor Maurice Watson of Beulahland Bible Church. "How about you?"