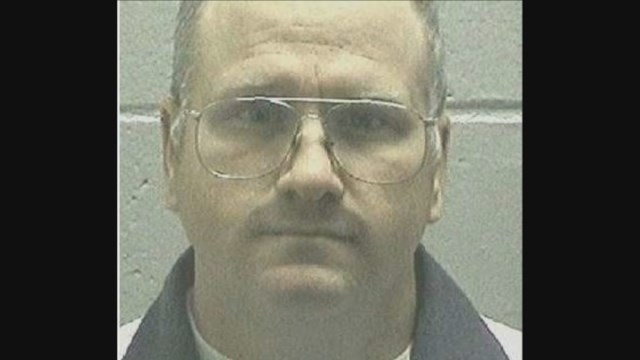 ATLANTA -- A former Navy crewman is set to be executed Wednesday in Georgia for killing a fellow sailor whose remains were found buried in two states.

Travis Hittson, 45, is scheduled to receive an injection of the barbiturate pentobarbital at 7 p.m. at the state prison in Jackson. He was convicted in the April 1992 killing of Conway Utterbeck.

The State Board of Pardons and Paroles, the only entity in Georgia authorized to commute a death sentence, rejected Hitton's request for clemency after a hearing Tuesday.

Hittson's lawyers have said he was mistreated and neglected as a child and constantly craved the approval of others. That, they said, combined with alcoholism and relatively low intelligence, made it easy for his direct supervisor in the Navy, Edward Vollmer, to manipulate him into killing Utterbeck.

In a legal filing, they contend his constitutional rights were violated during sentencing when a judge allowed a state psychologist who had examined Hittson to recount damaging statements Hittson had made about Utterbeck.

A Butts County judge on Tuesday rejected that challenge, and Hittson's attorneys have appealed to the state Supreme Court.

State lawyers say those arguments have previously been raised and rejected by the courts and are procedurally barred.

Hittson, Utterbeck and Vollmer were stationed in Pensacola, Florida, in April 1992 when they went to Vollmer's parents' home in Warner Robins in central Georgia for a weekend.

Hittson told investigators he and Vollmer went out drinking the second night they were there, leaving Utterbeck at the house. As they were driving back to the house, Vollmer told Hittson that Utterbeck planned to kill them both and that they needed to "get him" first, according to court filings.

When they reached the house, where Utterbeck was sleeping in a recliner, Vollmer put on a bulletproof vest and took a sawed-off shotgun and a handgun from his car and gave Hittson an aluminum baseball bat. On Vollmer's instructions, Hittson hit Utterbeck several times in the head with the bat and then dragged him into the kitchen where Vollmer was waiting, according to court filings. Vollmer stepped on Utterbeck's hand and Hittson shot him in the head, according to court filings.

They buried Utterbeck's torso in Houston County in central Georgia and brought the rest of the remains back to Pensacola and buried them there.

When investigators began questioning Utterbeck's shipmates a couple of months later, Hittson confessed and also implicated Vollmer, according to court filings. He led investigators to Utterbeck's remains and other crime scene evidence.

Hittson was convicted of malice murder, aggravated assault, possession of a firearm during the commission of a crime and theft by taking. He was sentenced to death for the malice murder conviction.

Vollmer reached a plea deal and is serving a life sentence. He was denied parole in 1999 and again last year. Reconsideration of his case is set for 2020, parole board spokesman Steve Hayes has said.

Hittson would be the second person executed in Georgia this year. The state executed five inmates last year, the most it has executed in a calendar year since 1987.