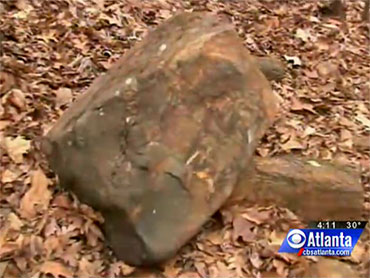 A 14-year-old Georgia boy is counting his blessings after he was nearly crushed alive by a 1,300 pound boulder.

Charles Marlow, of the Atlanta suburb of Marietta, escaped with only a broken bone in his foot.

The massive rock rolled down a slope and pinned Marlow's legs against another rock as he played on a hill near his home, reports Jocelyn Collins of CBS Atlanta affiliate WGCL-TV.

"All of a sudden, I looked back when I'm halfway down the hill … and the rock is falling towards me," he told Collins.

Marlow's father, Dan Marlow, heard terrified screams. "I tried to lift the rock and couldn't even budge it," he says.

Friends and neighbors pitched in, as well, to no avail.

So they called the Marietta Fire Department, which managed to hoist the boulder off of Charles.

Assistant Chief Kelly Caldwell, who supervised the rescue, says they "used the hydraulic ram to separate the rocks. As we lifted it, we used the wood cribbing to take up that space."

It took only about a half-hour to free Charles.

Of his son only sustaining the minor injury, Dan says, "I can't explain it. I think God was protecting him."

On "The Early Show on Saturday Morning," Charles told co-anchor Rebecca Jarvis he "tried jumping out of the way (of the boulder), but it all happened so fast. I mean, I look back, there's a boulder coming, (and the) next thing I know, I'm on the ground and it's on top of me.

"First, I was thinking, 'This can't be happening, this isn't real.' You know, this is not what happens normally. And I was thinking, 'How am I gonna do anything if I'm on crutches or on a wheelchair,' because at that point, I thought I was going to be on a wheelchair for the next couple months."
The pain, he says, "was almost like a crushing pain but, at the same time, it started, you know, as it got colder and colder, it got number. So it was kind of a weird feeling. It's not like any other kind of pain you've felt before of."

Charles added that, "When we were younger, we used to play on (the boulder) all the time, so it was kind of a freak accidents, and you can't plan these things or really stop them. So, I might" play by boulders again.